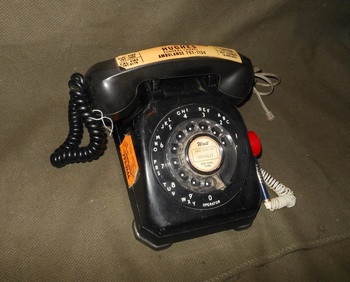 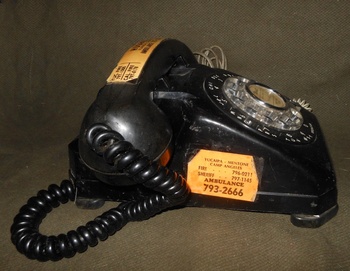 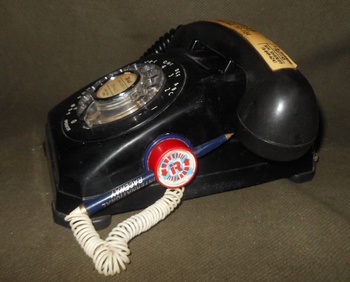 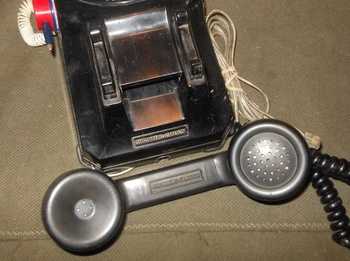 An old phone that has a lot of regional character. Note all the stickers with the emergency phone numbers along with Hughes Funeral Chapel. I would guess that this is from the Hughes Funeral Chapel which apparently still arounds in Yucaipa. It's an area San Bernardino County to the west of Palm Springs. Back in the 1950s it must have seemed like a warm version of Siberia. It is near the county line of Riverside and San Bernardino counties thus both phone numbers. Also note the ambulance numbers are different on the two stickers. This is an area along the foot of the San Bernardino Mountains where Fort Apache's fort is located.

Now for the phone it is a Stromberg Carlson 1543 an early 1950s phone. It was Stromberg Carlson's answer to the Western Electric Model 500 the iconic phone from the 1950s through 1980s and then some. It is also known as the Cut Corner 500. Aside from the cut corners the cradle lowers and raises to hang up or get a dial tone. The 500 has those two little knobs while the cradle is stationary. This phone survived into the modular era as it has the connector for that. Also it has the pen holder. That kind of looks 70s to me.

To wrap up it is a fine phone full of history. And stuff.