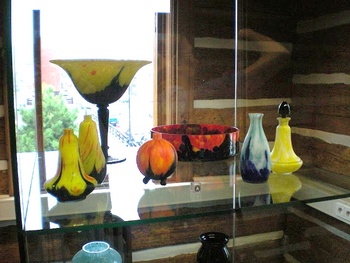 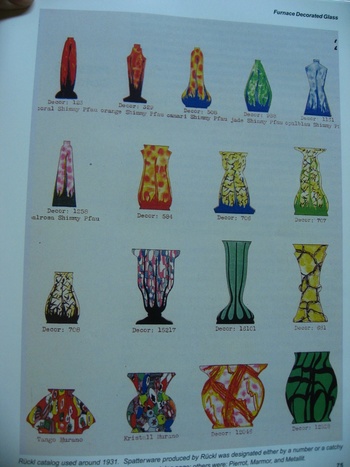 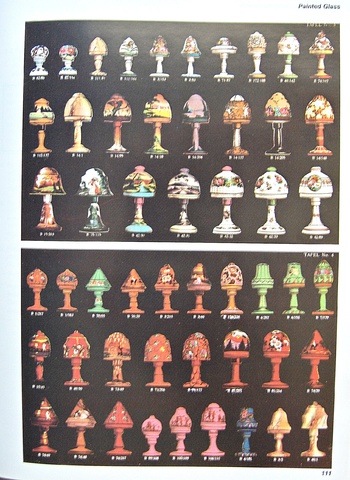 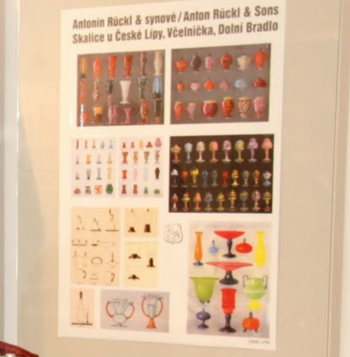 Of course I am repeating what has already been shown and explained during the last 5 years and before when the reference books about Bohemian glass were published in Germany and in the USA, by the Passau Glass Museum and by Robert and Deborah Truitt in two volumes in 1995 and 1997.

Seems that the knowledge about Czech glass has an ebb and flow as people come and go, through the normal attrition of life. Newcomers are not aware as much with the content and availability of information, that long term collectors have.

With Anton Ruckl and Sons, it is not a problem showing their existence and that they were producers in Czechoslovakia since 1843, but rather the huge change they made with the type of hot furnace glass for decorative purposes, instead of for business or any other market usage. Much needs to be documented, and as with the other post 1920 glass companies, this material is limited but not without merit.

An effort was made before the end of the WWII occupation by the Germans to erase and destroy as much of the available company archives as they could. Instigating an ignorance of their long term glass work and experienced decorative production. My feeling is that this was not totally satisfactory in it's result as they were forced to continue glass fabrication but on a much simpler scale of large utilitarian glass vessels, and eventually, resumed their cut glass crystal exports under the Borske Sklo label at the Nizbor plant. I wonder if today they regret what they felt they had to do to help them survive the unknown.

I think some of us would be highly gratified if they had kept and hidden some of their decor patterns, shapes and number of pieces.

We do have several paper documents which gives us a glimpse of the large and varied type of glass they designed and exported. Some are easy enough to find again on the resale market, as they were unique, the other pieces, are what other collectors have been forced to do, assemble a large enough glass collection, to sort what has the best glass profile to have been produced by the same firm.

In 2015, with the needed permission of several sources, I published a website called rucklczglass(.)com, to share the progress and the discoveries I made about Ruckl and other Czech glass such as Kralik.

My method was a personal one, especially when you start such a project with little support and help, as I prefer to work without a group's consensus behind me. This way, the inevitable changes were made, the site increased it's content, I would say with the same degree of accuracy as other sites have for this Czech glass period, 50 to 100%. Be it date, maker, mark and style.

Image one is one of the Ruckl glass groupings exhibits in Novy Bor in 2012, These pieces belonged to the Ruckl family, and were usually on display in their reception office area. They represent the decor 'shimmy pfau' in a satin finish and a mix of Tango color spatters.

Image two is a catalog page of shapes and decors, the first 2 lines are smaller perfume bottles dating about 1928.

Image four is a large wall poster published by the Novy Bor Museum for the Tango Sklo Exhibits, it contains much of what is available as documentation to this day, about A. Ruckl and Sons, during the Czech era 1920-40. I tried to get my own copy of this poster, especially for the top part that shows a variety of vases, lidded boxes and jars, pieces that were never shown before or after.

My next posts will show series of Ruckl glass pieces which are attributed using the information provided by these important documents.