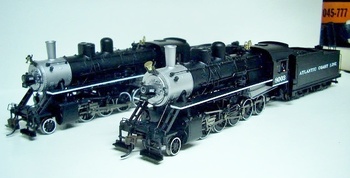 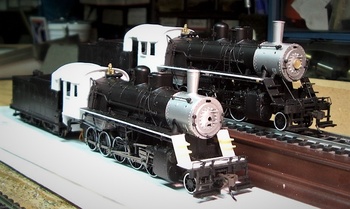 I kitbashed a pair of Bachmann locos backdating them close to as built. Photos ONE and TWO are the locomotives close to how they looked when they were built and left the factory. Photo 3 the pair together is how they were made to look as new by Bachmann the builder when I received them. Bachmann locos appear as they were towards the end of the use of steam in the late 1950's after many rebuilds. The USRA had 200 of these locomotives that they leased to many different railroads during WW1. Like with anything some railroads liked them and some didn't. At the end of WW1 these leased locomotives had to be returned to the USRA who then sold them. The railroads that liked them bought them. The ERIE had almost half of the 200 locomotives. Needless to say they loved them. The CNJ on the other hand didn't use them much and kept most stored in Pennsylvania at Mauch Chunk or there large maintenance facility at Ashley PA. After the war they returned them. The other railroads that liked them continued to order more new ones of this class and weight. It was a very successful class of locomotive.
edit added a photo showing changes made, new cabs and front pilot work. handrails haven't been added yet.