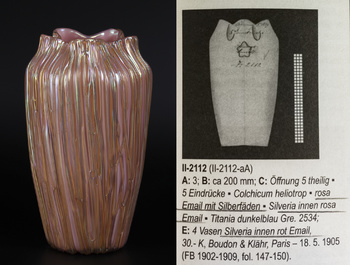 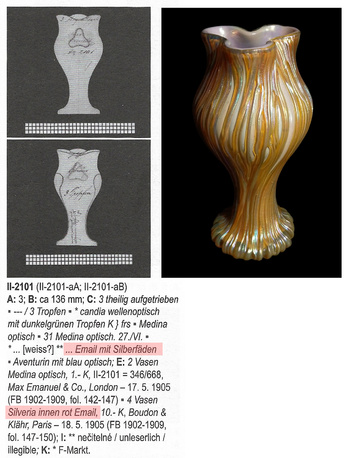 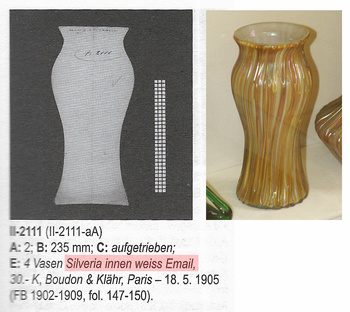 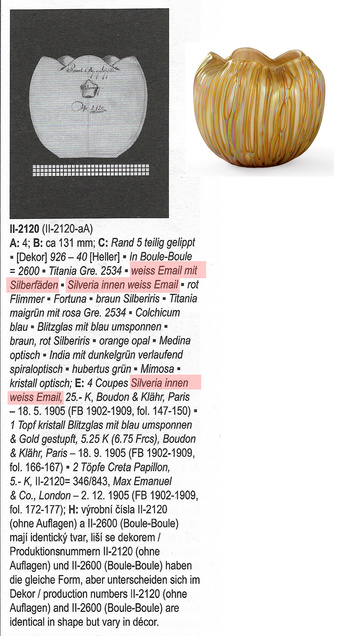 The Texas decor is known for a number of variations. The "original" version is made of green, more or less vertical glass threads, which appear in relief, some worm-like, others flattened on clear glass. The colorless version is known as "Blitzglas". Lötz used different Texas color variants for special applications like "Empire", "Gloria" and others. Texas also is the base for "Ausführung 8, 102, 117, 130, etc." Whereas Blitzglas and the original Texas are not or only weakly iridized, most other Texas variants show matt to strong iridescence.
When I got the vase of the first image with "rosa" (pink) coloration inside I did not find Texas under the list of decors on the respective pattern (II-2112), which wasn't much surprising. Now I got the smaller vase from a glass friend with the more purple color and again, no hint to Texas on the respective pattern II-2101. Curious, I looked for further examples for this decor. There are a few on Loetz.com. Again, all versions with silver threads and white or colored layers inside are not listed as Texas. Instead, they have different, common denominations. First is rather descriptive: "rosa Email mit Silberfäden" (pink enamel with silver threads). The second sounds familiar to glass collectors, but not in combination with Lötz glass: "Siveria innen rosa Email" (Silveria inside pink enamel). Both my examples show an opaque inner layer, which looks like a coating, rather than encased glass: enamel it is! Most patters list both denominations, a few "Silveria" only. I assume both designations stand for the same decor.
With this observation I feel comfortable to suggest "Silveria" as the decor name for the Texas variant with iridized silver threads and white or colored enamel inside. Picture 3 (a vase from the Passau Glass Museum) and 4 (Tajan auction house) show two other examples supporting this suggestion. And there are other matches.