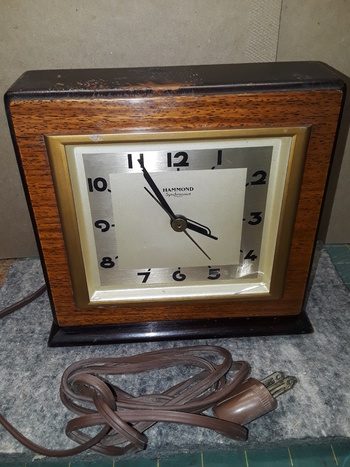 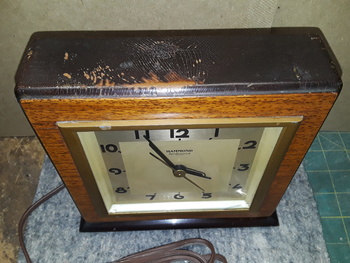 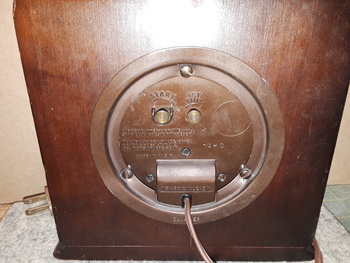 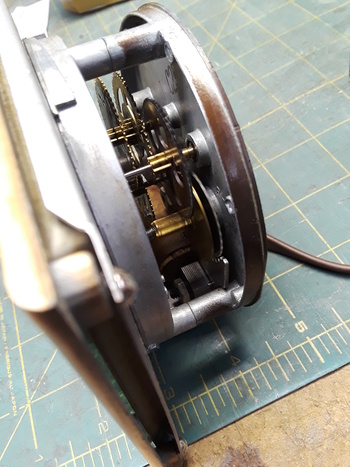 This HAMMOND clock is one of their "CAVALIER" models. Its case is made of solid wood (mahogany?) drilled to hold the actual round clock mechanism with rectangular face, finished to show off the pretty woodgrain on its front around its dial -- its sides and back in a more opaque dark finish. Note the way-fun font of its numbers (the same used on my "Hampton" model, I think?) as well as its generally splendid art-deco styling, (especially its hands!) Hammond apparently really did employ the services of some rather talented designers at the time. It measures about 6-3/4"h x 7-1/4"w x 2-3/8" at its base, being somewhat narrower at its top edge such that its front surface is slightly angled rearward from the vertical. Details difficult to see in the pics include the wording "MADE IN UNITED STATES OF AMERICA BY HAMMOND INSTRUMENT COMPANY, CHICAGO, ILL." just under the bottom row of numerals on it face, also that its sweep second hand is (unlike the hour and minute hands) finished in brasstone (the others are black) but due to the fact that both its ends are exactly the same length and shape, one end has a black painted tip to differentiate it from the other.

Please SEE ALSO my previous showings of a few more old Hammond clocks with further background info/links to all of 'em, starting here:

This specific clock remains in imperfect (original anyways?) condition, with some relatively minor cosmetic damage to the finish on its topside as well as general dings/spots/etc of "time" [pun not completely intended?] on the rest of it. It is also still kinda functional though its inner mechanisms are nonetheless showing their age, it is now rather tricky to get it to "SPIN TO START" like it should do, plus it now has a propensity to randomly stall and/or turn itself around and run backwards every once in awhile anyways, even when one did twist its START wheel in the correct direction in the first place. Maybe not too much to ask from a little machine first built ~90 yrs ago...?? ;-)

The last pic here is of the innards of its movement. The parts seen in the lower RH corner make up its actual "synchronous motor" assembly which drives it.