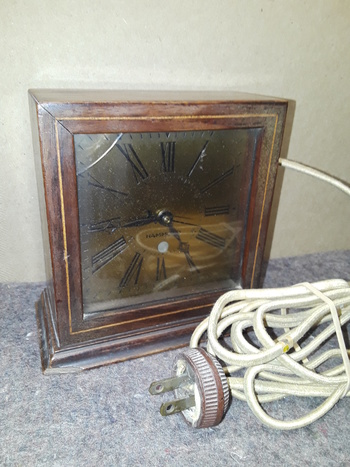 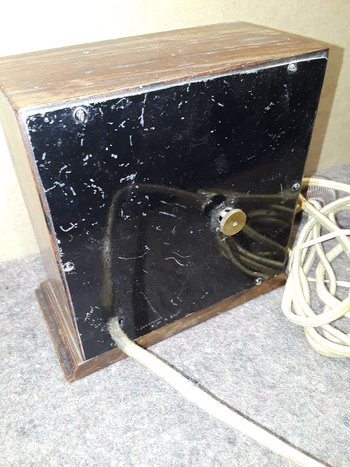 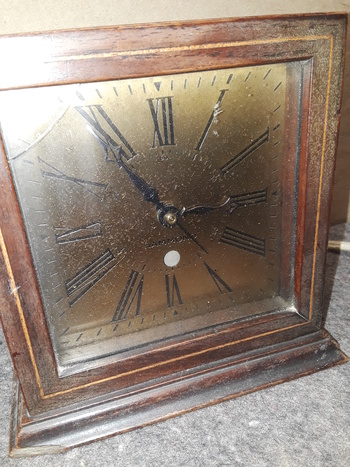 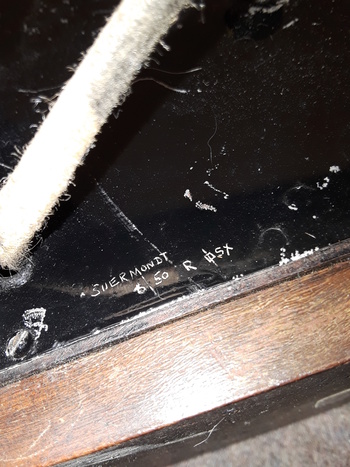 Except for its case and face that is, its inner movement and original back with nameplate have already been replaced sometime long ago by someone else. Without the info that would have been on its nameplate I'm not sure which exact HAMMOND model it was. Also assuming its hands are remaining original but that might not be the case either. No clue whether its cloth covered power cord and plug are original, but they're obviously old and still in good shape considering.

The clock case is basically 5" square, on a base that's slightly larger on its front and sides, now with one corner chipped off. I'm guessing it is made of walnut but it might be something fancier (rosewood?) or not (mahogany?) with a lighter colored inlay around its front edges. Its finish is in basically good shape surprisingly, but the wood underneath shows lots of weird (sun?) fading that makes it hard for me to now identify.

Its face is made of engraved brass with its roman numerals and legend (including the HAMMOND name) filled in with black enamel. The small hole immediately below its center would have showed the 'telltale' mechanism of the original movement, now revealing nothing at all.

On its current backside there's an odd scratched-in 'signature' (?) that might be the person/mark of whoever did the "conversion" of this clock in the first place. Reading "SUERMONDT" with a few other letters/numbers/symbols, the same name is barely still visible written in pencil on the bottom of the clock (not shown) along with other initials/date (??) "RCS-5-11-50", also a tiny paper label reading "OK 10/81" written in ink.