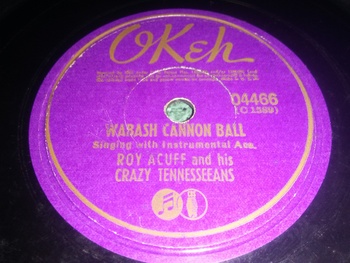 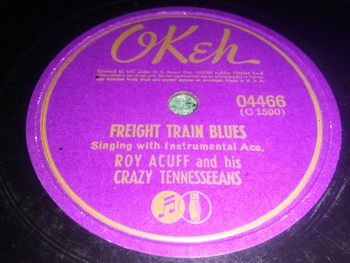 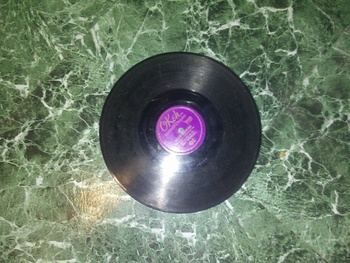 Hank Williams Sr. once quoted, "When it comes to drawing a crowd, it's God and Roy Acuff"....
Roy was born in 1903 in Maynardville, Tenn., and began in the 1930s. He is considered by many to be the 'King Of Country Music'.
In 1936, Roy took a sheet of Music written years earlier to a song titled, 'The Great Rock Island Train Route', written by a Mr. J.A. Roff and changed it to the 'Wabash Cannonball'. It took the Music world by storm.
The Wabash railroad was a fast moving express train that traveled through The middle and Western United States, along a route known as The great Rock Island Route.
Roy received many honorary awards from this recording throughout his years until his passing in 1992 at age 89.
It is considered one of the most influential songs recorded by the Songwriters Hall Of Fame.
Recorded 1936 on the sought after Lable 'Okeh'. The song 'Freight Train Blues' is on the flipside.