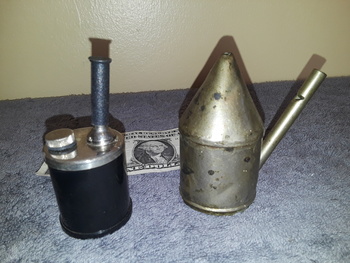 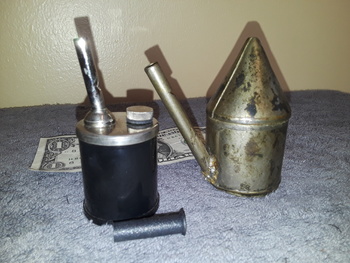 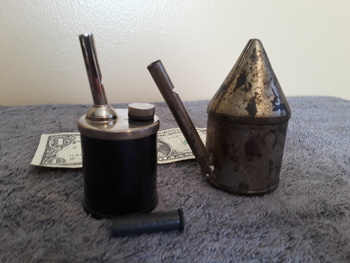 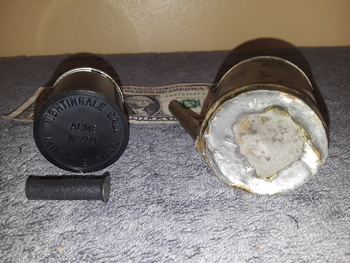 Here's a couple more 'weird sorta musical thingies' from my drawers and boxfuls of odd stuff... ;-) :-)

These are two different examples of a 'warbling bird call whistle'. When the little canister part of either is partially filled with a liquid (water will work, a light mineral oil or glycerine/water combo lasts much longer if not spilled) then lightly "blown into" via the diagonal tube protruding from each -- a kinda bubbly-warbly sound much like an actual bird call is produced.

The one on the left is no doubt the newer, its black plastic body identifies it as an "ACME No 499 NIGHTINGALE CALL MADE IN ENGLAND" on the bottom. I don't know exactly how old it is, though it would appear that the ACME Company that made it is still around, incidentally also the makers of the ACME THUNDERER police/sport whistles I showed recently.

The one on the right is decidedly different in age and origin, if not in function. Though I cannot "prove" anything whatsoever about it, I *do* know that I got it from a pile of parts which had once been a "theatre pipe organ" -- read: the 'Mighty Wurlitzer' that provided the musical soundtrack to the silent films of the 1920's/30's "movie palace" era. Those sorts of organs usually included a small battery of 'sound effects' mechanisms along with their pipes, to make various drum/cymbal/bell/oogah horn/horse clop/etc (birdcalls, too!) sounds to help the organist "play the movie".

While its basic parts do appear to have been 'machine made' (if not 'machine assembled'?) it also has obviously experienced lots of somebody's long ago soldering iron to seal (or more likely re-seal?) its parts together. Probably tin plated brass, there are no visible markings now on it to show who made it, if there ever were any. Even without other evidence, I'll call this one late 1920's-ish.

I'm still looking for a 3rd (and even more distinctly different) one of these things I know I also have stuck away somewhere around here too but it still eludes me...the search continues... <groan>