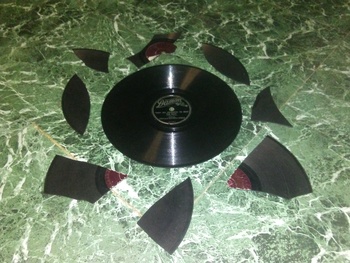 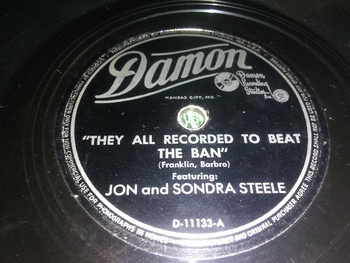 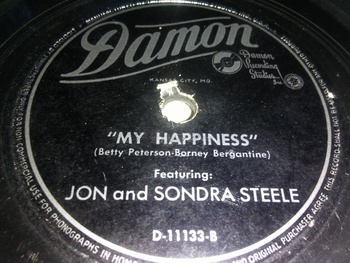 This particular disc has three.qualities to a collector...,Rarity, Obscurity and History....
In 1942, A.F.M. President, Mr. James Petrillo, of which at this time, The American Federation Of Musicians had alot of authority, banned all commercial recordings in the U.S. until 1944 and again in 1948. This was a little to do with the militarys need for shellac during WWII for war goods, but mostly due to Petrillos war against musicians and record labels. who would not join the music union. They became known as the 'Petrillo Bans' and he and the bans were not very liked by the general public and especially by musicians and Lables that wanted total freedom in their artistic endeavors.
A few labels sprang up independently and broke the ban. One of those was the Damon Lable, which sprang up in Kansas City, Missouri.
One And only a few artists that recorded on Damon was the non-union Jazz songsters,Jon and Sondra Steele.
This disc contains a number titled, 'They All Recorded To Beat The Ban... recording this during the 1948 ban.
On the flip is the most popular of theirs, 'My Happiness'.
Later, Mr. Petrillo was ousted as President of the A.F.M.due to his refusal to allow black artists to be in the union when segregation took place.
If you ever research Damon Records, this record will be about the only one you will see.
And oh, ironically, in 1948, vinyl records were introduced, changing everything.
Shellac was produced from 1895 to 1953.