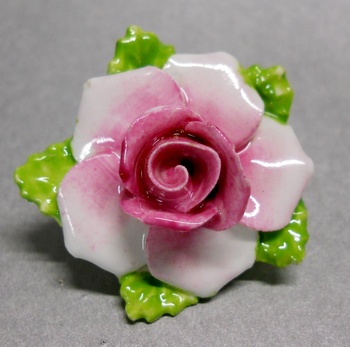 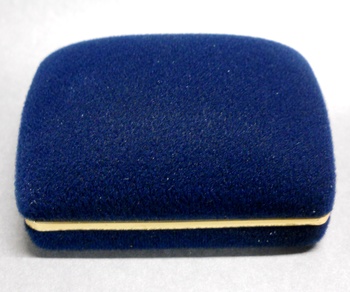 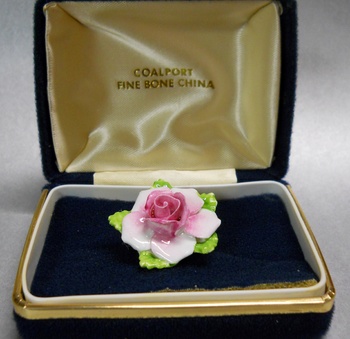 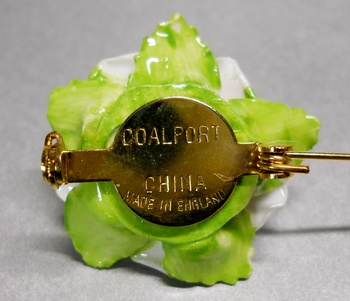 This is another one of my find on last Friday, any jewelry collector dream to find pieces within the original case, this one as the original jewelry case in Blue velour with the maker name inside "Coalport Fine Bone China" very nice & realistic color of a Rose flower, stamp under Coalport China, Made in England, this is the second one in my collection, the other one was post 2 years ago.

Coalport China England
The history of Coalport China begins in 1750, when Squire Edward Brown started Caughley China to produce clay dinnerware using clay and coal found on his estate. After Squire Brown’s death in 1753, his nephew took over the firm, and was later joined by Thomas Turner in 1772. Turner was known throughout England as a premier engraver, and was among the first to use transfer printing to decorate china. Turner is also credited with being the first to adapt the famed “Blue Willow” pattern for English pottery. When Turner travelled to France in the late 1770s to learn more about the porcelain-making methods there, he recruited many French artisans to work for Caughley China. They joined the already talented staff of English artists working there, which included an apprentice named John Rose. Rose left Caughley in 1793 to start his own porcelain company. That same year, a new canal was completed in Shropshire, England, making what was once a riverside meadow an important transportation hub – this new industrial center was named Coalport.

In 1795, John Rose moved his production facilities to Coalport, and in 1799, bought Caughley China following Turner’s retirement from the firm. At the beginning of the nineteenth century, Coalport China primarily manufactured hard-paste porcelain wares, sometimes supplying them as blanks for final decoration in London. In 1800, John was joined at Coalport by his brother, Thomas Rose, who built a china works across the canal from John’s. In 1814, John Rose bought Thomas’s business and merged the two companies.

The consolidated company continued to expand in the following decades, gaining talented employees and equipment from the other porcelain companies it acquired. Authors Henry Sandon, Joan Jones, and Garrison Stradling point out in “Sotheby’s Concise Encyclopedia of Porcelain,” that Rose, under the influence of manufacturers in Sevres, employed “two artists, Cook and Randall. Cook’s specialty was flowers and Randall’s fancy birds.” Cook’s artistic talent was a particularly invaluable asset. “Flowers and leaves are the very embodiment of Victorian Rococo,” the authors note, “and were applied to a wide range of objects.”

When John Rose died in 1841, the company passed to John’s nephew, William Frederick Rose, along with Thomas Rose, William Pugh, and Charles Madison. In 1862, William Frederick Rose retired, and, left in the hands of Pugh (who focused mostly on imitating Sevres-style porcelain), Coalport began to have financial difficulties. The company was eventually turned over to Peter Bruff, a civil engineer and businessman, in 1881. Bruff had little experience with porcelain manufacturing, but when his son, Charles, took control of the company in 1889, he brought with him an enthusiasm to revive the once-great company. He began gathering talent, and sought to revive Coalport’s classic designs in addition to new, original ones. The company maintained a successful recovery until it began to decline again following World War I. Coalport was sold to Cauldon Potteries in 1925, and in 1926 was relocated to Stoke-on-Trent, home of several other prominent English dinnerware manufacturers. In 1967, Coalport became a member of the Wedgwood Group, and today the brand continues to produce the high-quality pieces it has become known for in the more than 200 years since its inception.