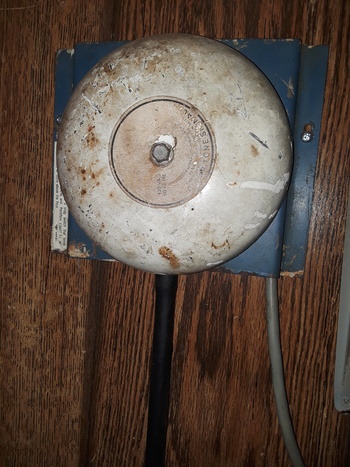 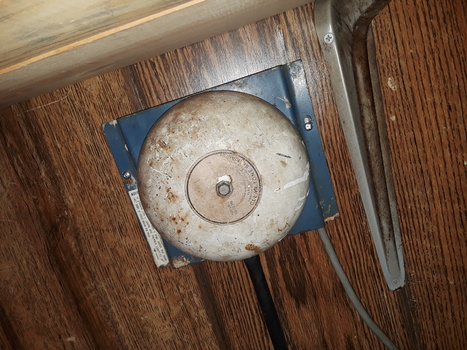 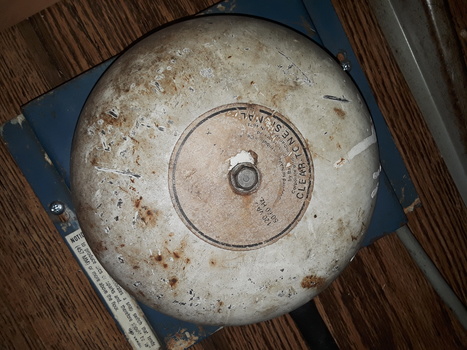 Nowhere near as old nor as pretty as EJW-54's vintage MILTON bell that rotated thru the front page of CW again the other day, nonetheless this one's mine, pictured where it currently exists screwed to the wall under a shelf in the (enclosed) storage portion of my carport, where it rings every time I come and go to tell me exactly where I should stop my truck in order to still be able to walk around front of it if I should need to. Its gong is roughly 6-1/2" across, the (black) rubber actuating hose and (gray) power cord exit at the bottom. It *is* surprisingly loud (there's good reason why I have it mounted 'inside'...I have neighbors too?!) and perhaps unlike EJW's bell (I don't know?) this one's mechanism allows it to ring continuously (instead of just once) if one stops (or even 'steps' -- it is also surprisingly sensitive?!) *on* its hose instead of just over it.

It probably isn't all that very old, in fact it turns out that bells just like it remain a current NAPA Auto Parts catalog item (made by BELKNAP) so any of y'all that might want could also have a shiny new one for ~$60 or so?

The story of how it happened to come to me is its probably most interesting 'feature'. ;-) One sunny springtime morning (+/- 15yrs ago?) I was sitting at my desk doing my then normal 'morning routine' of checking email/etc., with the window open to enjoy the fresh air. At one point I was distracted by the sound of a beat up old pickup truck dragging a big flatbed trailer heaped with scrap metal junk clattering thru the intersection below, and actually looked up and out the window just in time to glimpse some little 'blue thing' actually bounce off the back of the trailer and slide to rest at the curb, also making an interesting ringing sound while doing so. Hmmm, I said to myself, don't forget to go pick that up and throw it in the trash when you leave for work. And when I did, realizing what it really was -- I dropped it in the back of my truck instead...? ;-) :-)

It indeed *was* in kinda 'scrap metal' condition, its blue backplate part needed some creativity with a vise and channellocks to unsquish it, and its (lots of plastic) inner mechanism was deranged beyond repair. (original power cord still OK, though?!) Happily enough, a quick look around the internets shortly revealed both its NAPA heritage *and* that for just a visit to my local NAPA store and $20 or so (IIRC?) I could (and did) pick up a complete replacement mechanism and a length of the exactly perfect sorta rubber hose for it?!!