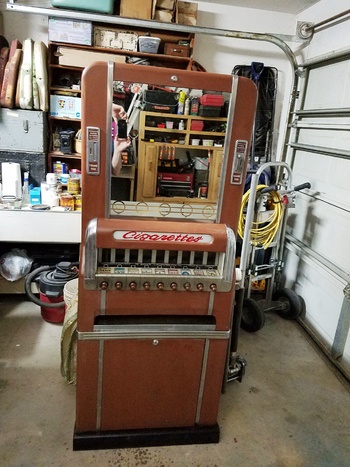 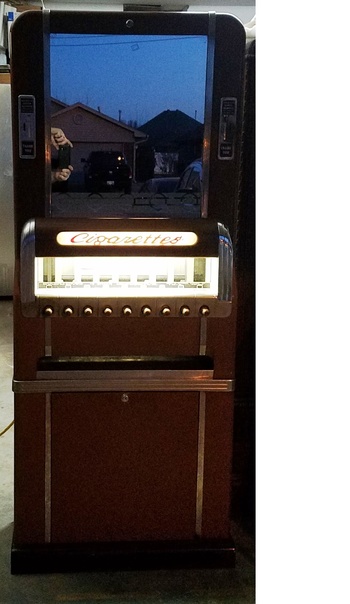 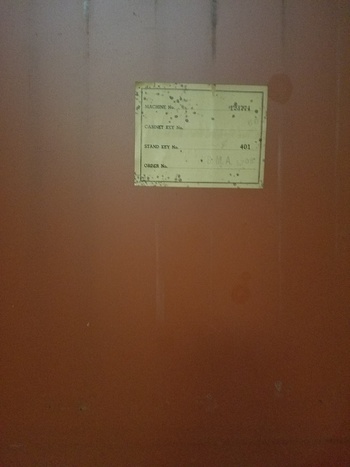 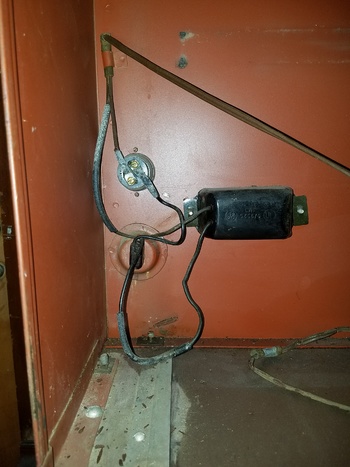 This is a National Vendors machine ( a division of UMC Industries Inc., 5055 Natural Bridge, St. Louis MO.) National Vendors
The company was originally National Sales Machine Company, and was founded in 1926 by B. E. Fry, a St. Louis businessman, who invented a fail-safe vending machine that would accept only coins. By the 1930s, National was well established manufacturing a variety of merchandisers, but the company went under in 1932 due to the Great Depression. They reopened the company as National Vendors, Inc. in 1934. After WWII, goods sold through vending machines grew $600M to $3.2B. The range of products became more diverse with pastries, hot foods, sandwiches, candy and cigarettes – all using the same machine platform. National Vendors, Inc. was sold to Universal Match Corporation (later known as UMC Industries, Inc.) in 1956. Universal Match viewed cigarette vending machines as a pipeline for match booklet distribution and the installed base delivered a book of Universal matches with each pack of cigarettes sold. They are still in business today as Crane Merchandising Systems. I found this covered in red dirt, Racoon, Pigeon, and Cat poop, at an old warehouse in Mineral Wells Texas. After ridding her of the Bio-Hazards and some thorough, but gentle cleaning and lubrication, the mechanisms work, including the original electrical (notice the GE transformer?) and the coin mechanism(s). She still has the original manufacturer's label inside (its a National Vending Company model 9 - based on the 9 slots/pull levers. They made, models 7M, 9M, 9ML and 11MLs in this date range. The paint is original, and so are the chromed pieces, although there's some pitting and blemishes (patina). I'm not lazy folks, I'd rather preserve the original than repaint and re-chrome and lose the value of the original when a piece isn't badly damaged. The etched mirror is also original, Some of the silvering has some seep-through from the original mounting adhesive, but again, I elect to leave it as is. Just like people, that have value and character, those wrinkles, lines, and age spots tell a story that is priceless (at least to me; especially as I'm getting older too ! ).
Alas, I did have to give in and replace the locks on the upper and lower compartments. I was unable to find "period" cylinder type locks with keys (so far). But when I do I will replace them with NOS or used National parts when I find them. There are two pull handles that have some of the handle material cracked/missing -- still searching for the proper cocoa brown color. I'm also still searching for the metal price display insert that goes just above the cigarette brand displays. Any help finding these items would be greatly appreciated! Until then, the florescent light shines beautifully as this piece adorns the entryway of my home at night next to a late 19th century icebox in the eccentric and eclectic decor of our home. Thanks for reading.

Replica REPLACEMENT KEY for the Ast...
$10