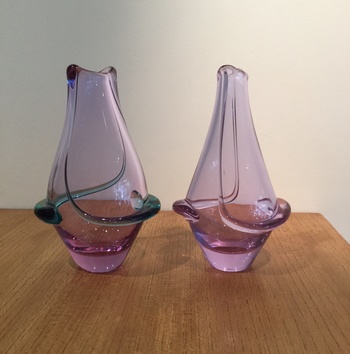 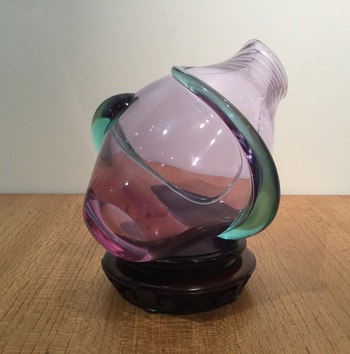 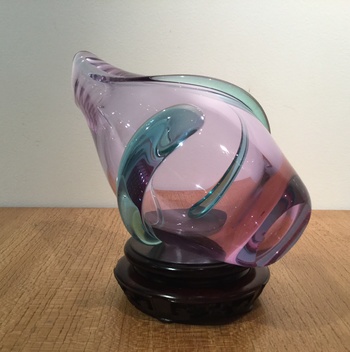 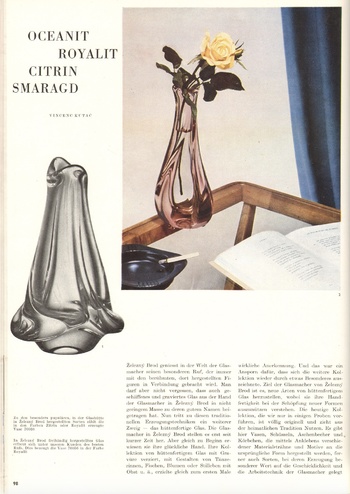 Photo 4 is from the Vincenc Kutac article in the Tschechoslowakische Glasrevue v. 16, no. 3, 1961. It concerns the names of the colours used by Zeleznebrodske Sklo in their 1961 collection:

They are the four colours used for the ZBS collection of glass.

The vase No. 70038 was designed by Frantisek Zemek .... one of my favourite glass designers of all time. He was born in 1913 at Zlatno u Lucence, Slovensko and tragically died young in a road accident in 1960 at Sumperk.

He worked at many of the Czech glass works including Mstisov and Rueckl. He won a scholarship from the Prague Kunstgewerbemuseums to work in the Glashuette Rueckl in Nizbor.

However his work in the glass industry began much earlier as an engraver. Talented, he worked his way up to be a designer of some famous glass objects at a variety of factories. His work at ZBS began in 1950 and he worked at Skrdlovice and at ZBS until 1955. Later he went to Mstisov and produced designs similar to this one with the applied ‘tadpoles’ one of which I will post separately.

But this design dates to 1957 according to Mark Hill : “This particular vase, devised in 1957, is an early example of his designs and was deemed important enough to be included by Josef Raban in his landmark book ‘Modern Bohemian Glass’, published in 1963. As well as being typical of Zemek’s hot-worked designs with its curving, organic form and applied trails, it also hints at machinery with its resemblance to propellers and spun screw threads. For its date, as well as for its country of origin, this design is highly Modern and progressive.

The example shown in Raban’s book was made at Mstisov, but this example is more likely to have been made at Zelezny Brod during the 1960s judging by the yellow (Citrine) and brown colouring and the precise form. They’re not all that common, and can be found in a range of colours, sizes and variations in proportions. I really rate Zemek as a good buy for the future, and think this early design is well worth looking out for. Expect to pay anything from £5 to £30 right now.”
(https://markhillpublishing.com/frantisek-zemeks-glass-designs/)

Design 70038 was produced successfully at ZBS from 1961 and I suppose are a posthumous tribute to his genius.