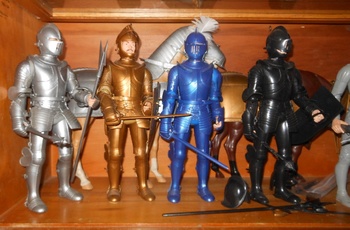 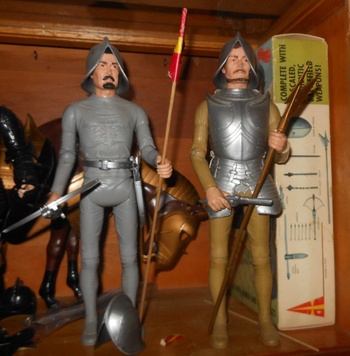 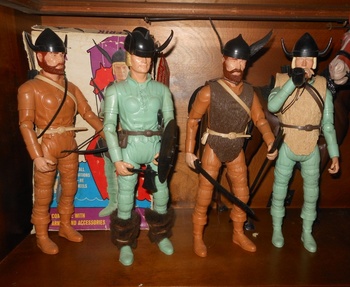 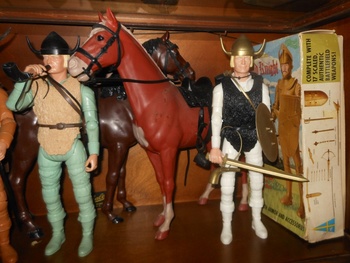 I was doing a bit of research on this and came across research done by me so I will take my word for it. "The Noble Knight series was released in 1968 and sold until 1973." Sounds right to me.
My knights and Vikings are on two shelves. There is also a large box for the Gold Knight horse but it is not currently on display.
Top shelf are the knights. Silver and Gold are the original Noble Knights from around 1968. The Blue and Black Knights are reissues from around 2000 made in Mexico. The Black Knight should have been the standard original coor. The Black Knight was issued in England back in the late 60s but it is rare.
Shelf #2 is for the Vikings Odin and Eric. Odin is caramel colored and Eric is green. Same color green as used in the small Viking playset figures. Also a pair of horses for the Vikings although the horses are actually Johnny West horses with Viking tack. The Viking horses had moveable heads and necks, they are called nodders. In photo #2 in the background is a nodder. Note how the head is down which is a bit annoying like the horse is grazing instead of being a mighty fighting horse. It is hard to keep a nodder from any position but this. So I prefer a Thunderbolt style horse. The original nodder was Buckskin from the Johnny West series. The Vikings were released in the early 1970s. In history according to toys Knights and Vikings go together as do dinosaurs and cavemen.
Next up in the Marx series of posts is Stony Smith and Mike Hazard.