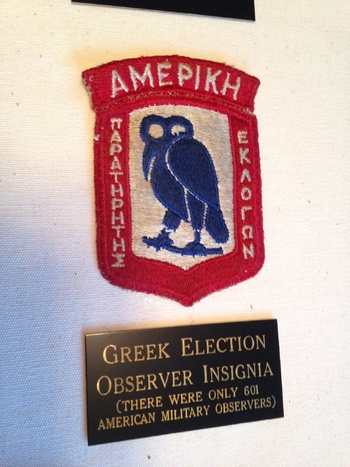 The design of an owl peeking over it’s wing signified a wise, vigilant entity, quietly watching/observing.

Background info: Greece had a long history of being under a dictatorship, then being occupied by Axis forces during WWII, then after WWII was ended and Axis forces withdrew, a civil war broke out between factions representing democratic and communist government. The country was in ruin.

The Varkiza Peace Agreement of Feb 1945 included a provision requesting Allied Powers to send observers to monitor elections to verify fairness, prevent intimidation of voters and ensure the compliance of the citizens with the Greek election laws.
Governments of Britian, France and US accepted the Greek government's invitation to send observers.

Even though the mission was civil, not military, mission developers knew conditions would be difficult and that the training and expertise of military personel would permit quicker adaptability to the work to be done.

Members of the mission met in Naples in Feb 1946 for indoctrination and training of map reading,physical training, first aide and vehicle operation and maintence as well as crash courses in the history of Greece, geography and politics of Greece.

The members were assigned to teams of 3 men which included an officer, an enlisted man and an interpreter. The teams were dispersed in Jeeps throughout 5 districts: Athens, Herakleion, Tripolis, Patras and Salonika to conduct the Mission's business.

My father was the officer on one of the teams which were assigned to Patras district.
This was the insigne he wore on the left upper sleeve of his US military uniform.
He kept this unusual looking patch in his footlocker along with a few pictures he made from a vantage point overlooking Patras and a picture of him attending large group meeting of AMFOGE members...... After his death at age 93, this memorabilia came to me to treasure.
But the true treasure, to me, was him, as a brave and courageous soldier and father. He had earned a Bronze Star for heroic action in Germany and a Battlefield Commission to First Lieutenant. He didn't talk about that very much but would joke that he was most proud of the Bronze Star and the Good Conduct Medal.