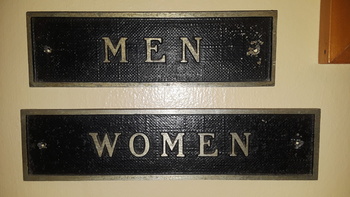 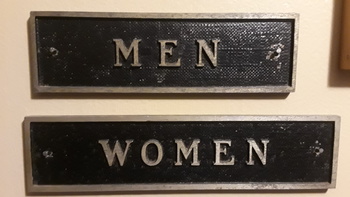 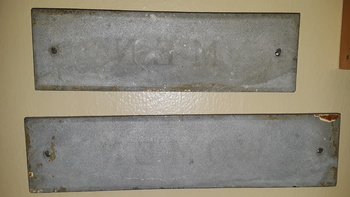 More of the 'smalls on the wall'. BTW, did I mention said little wall is immediately beside my bathroom door, thus its seemingly appropriate location for displaying these little tidbits...?? <LOL>

These are a pair of cast aluminum plaques with raised/ground edges and letters over a black painted/textured background. Both measuring 2" high, the 'WOMEN' sign is 8" long, 'MEN' more like 6.5", both roughly 1/4" thick.

Both were recovered from the former Pabst Blue Ribbon brewery once located in Peoria, IL [Hi, Thomas!] which was razed in the early 1980's, probably from some sorta 'office' part of the facility. I don't know that for sure, they were saved/given to me then by a friend who worked on one of the scrapping crews demolishing the plant at the time. I also have a couple more like these (still in boxes somewhere) with other relatively unusual legends on them [one reads "PHOTOGRAPHY" for instance?] along with a handful of other semi-interesting bits my friend then also brought to me... ;-)