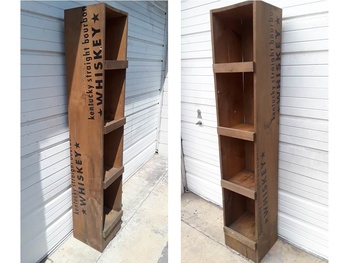 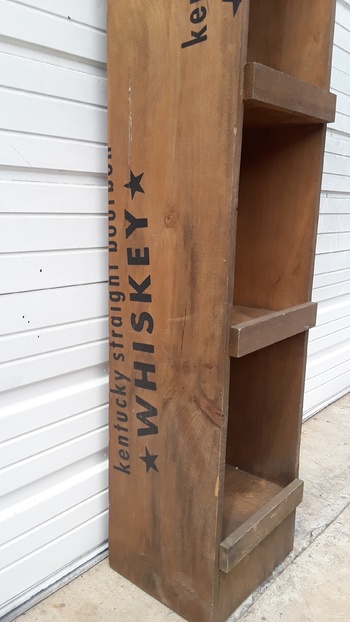 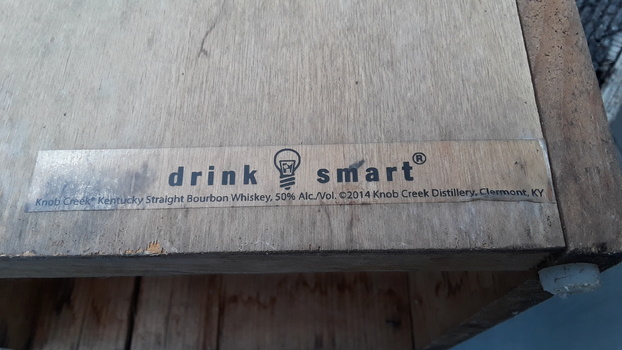 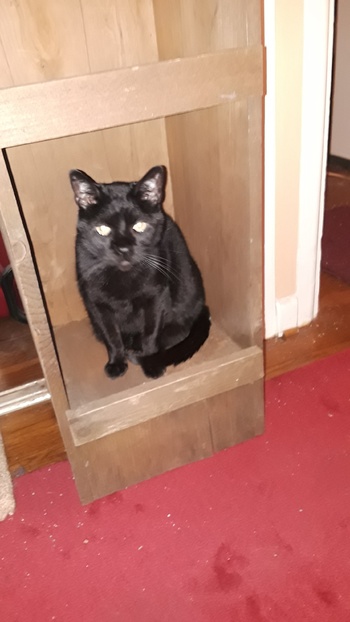 Truth be told I've been slightly envying this shelf for a couple years now, while seeing (also lamenting) it sitting outside on my next door neighbor's deck. As we all know, most wooden things (esp. 'unfinished' ones) don't often hold up too well under such circumstances... :-( :-(

Then what to my wondering eyes should I see suddenly moved 'curbside' at their house while I myself was leaving for work this morning, looking rather forlorn indeed still sorta full of 'backyard detrius'. <ughh> When it was still sitting there when I returned home for lunch, I finally looked a little closer at it then ultimately tipped it into my truck to take back to the shop and try to clean up with the air hose/etc -- one way or the other it looked like it was still *all there*, even if crusty with crud.

Once I got it there I finally discovered the likely reason they set it out -- turns out there's apparently some variety of big yellow/black bumblebee looking insects called "carpenter bees", things that for some reason like to eat/bore holes into soft pine wood. (which this shelf is made of) ALSO TURNS OUT that some of 'em had found this thing and started to 'set up shop/chew into it'. Note the light colored 'bullet holes' visible on its outer LH side between the K and E in the upper word "WHISKEY", a couple more spots visible inside the 2nd shelf down, there are actually one or two more not seen. Several of these insects indeed were still hidden somewhere inside it (unbeknownst to me...I checked it for spiders, but not bees??) which I only discovered (then chased off/extinguished) when beginning to clean it up in the parking lot. <eeek>

And anyways, then after a most thorough brushing/airblasting/inspection and only a little bit more gentle TLC, HERE'S WHAT I GOTS. I actually think I quite like its now somewhat 'weatherbeaten' look, which to my mind will fit in sorta perfectly with the rest of my (too many) assorted old wooden crates that help form my interior decor. ;-)

The 3rd pic shows a small label on its lower backside confirming both its lack of a whole lotta 'age' and its KNOB CREEK BOURBON heritage. There's little doubt it was first a liquor store display merchandiser, which if I hadta guess probably came from the bottle shop a couple blocks north of my house. (I know my neighbor shops there too, anyway...? <lol>) It measures basically a foot deep/wide, and stands 5'7" tall.

LAST PIC IS JUST FOR FUN -- as any of y'all who share your lives with furballs will instantly understand -- it was literally snapped ~2 mins after the shelf arrived 'inside the house' later this afternoon. Apparently it "passed inspection", since he then spent the next hour+ curled up dozing on what will do doubt end up being "HIS" bottom shelf. <rolleyes> Oh well, it still has 3 others plus its top for me to stack full of other crap, once I actually find someplace to put it?? <LOLOL> :-) :-) :-)