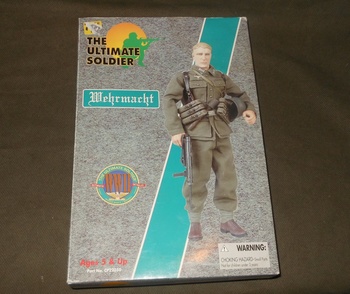 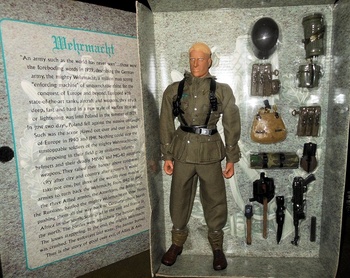 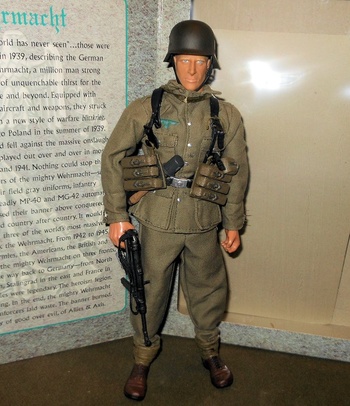 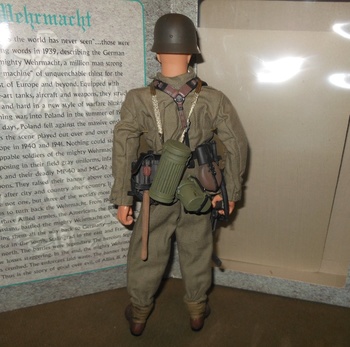 21st Century Toys started making 12" accessories sets in the 1990s. The first ones were based on the Vietnam War. Originally they did not make any figures of their own so one had to use GI Joe figures. Luckily there was a glut of the Masterpiece GI Joe reproductions at the time. Eventually they started making their own figures and came out with tonnage of their own product such as this figure. This one was released in 1999. They made excellent quality figures at a reasonable price. They made so much excellent quality pieces at reasonable prices that they went out of business in the early 2000s.
Wehrmacht is what the German army is called so this is a German WWII soldier. Must be a sergeant because he has an MP40 instead of a rifle or Machine gun. In the German army it was based around the machine guns. I'll post a German machine gun team some time soon.
It can easily be seen that this figure came with a lot of accessories. Took over an hour to put him together. All the accessories that attach to the belt (most of them) have to be put on in the right order. If not they all have to be removed and start over. Took me over an hour but I am pleased with the result.
Taxidermy Tuesday will return next week. Unless I find something else I would rather post.