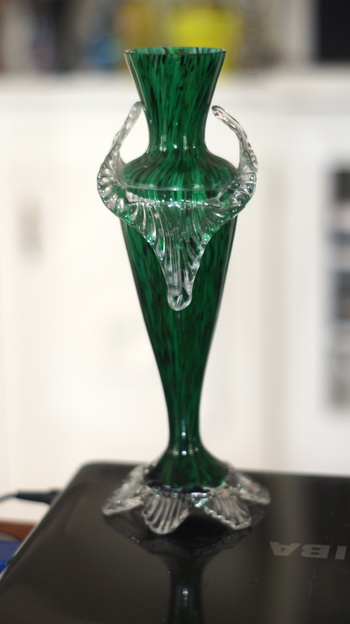 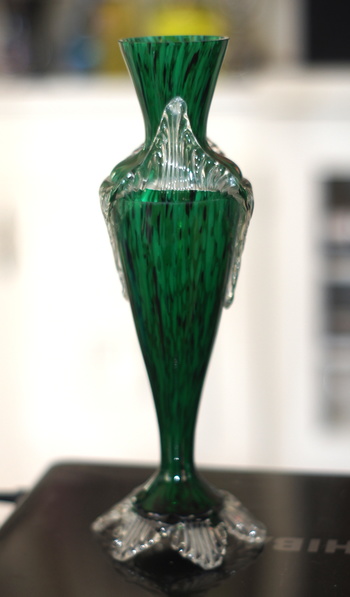 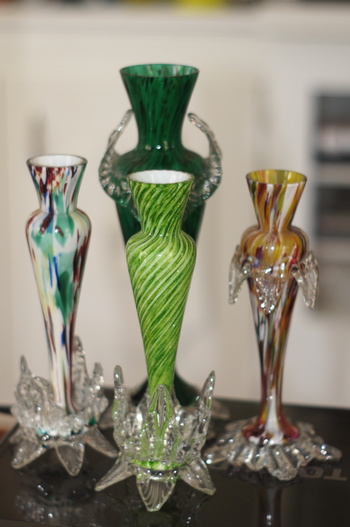 There are 4 main things that get me excited about my Welz research. One is the discovery of new shapes, as shape ID’s generally lead to décor ID’s. Another is new décors, as these in turn also lead to new shape ID’s. The third is new sizes of previous shapes. The last is New forms of rigaree on previously identified shapes…… All of which leads me to this piece….. An example I have to point out was forwarded to me in the form of an ebay Buy It Now by Jericho. A Buy It Now that I used instantly when I saw the piece and then read the description.

This example checks 3 of the 4 boxes….. Something I would point out at this point is the most a new piece can achieve, as at least one of the boxes leads to the other 1, 2, or 3.

This piece is a form I have in several other decors, and also in a couple of different rigaree and foot designs. An elegant form rising from a small base with applied feet, to a sharply angled shoulder with a trumpet form neck and rim.

Where all of the examples I have seen of this form through the years stand at a height of 8 to 9 inches depending on the style of applied feet, this example stands at 9.25 inches, and is noticeably larger than any other example I have ever seen. Check Box 1, a new size of a known form.

Lastly, and always the most exciting to me, a new décor. The décor consists of streaks of white and also oxblood (which appears black) which have been applied to an inner lining of clear. Those layers are covered in an outer casing layer of an almost emerald green. I think it is important to note at this point, that the only method by which new decors can possibly be identified in a supportable manner, is by finding one on a known Welz shape. Had I seen this décor on a form I had not previously identified, I would have never known it was by Welz. Check box 3, a newly identified décor….

Image 1 and 2 show the piece from two different side…. A front shot and a image from the side.

Image 3 shows the new size, décor, and rigaree in comparison to other examples of the shape in my collection.

Finds like this example, with a new décor, always get me excited as I know that they eventually all lead to new shapes being found….. which invariably leads to new decors……. True and supportable research is like building an inverted pyramid…. You start with a small base of a handful of shapes and decors, and from that one slowly builds an inverted pyramid which increases in height and breadth as time carries on. I am like a kid with a new toy when a piece like this shows up….

Thanks Jericho….. Without your help, I may have missed this one completely. Your help through the years has been invaluable to my research.