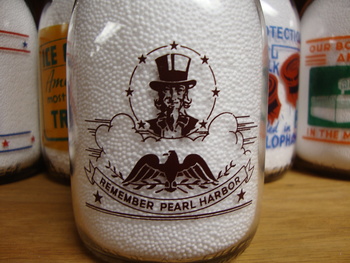 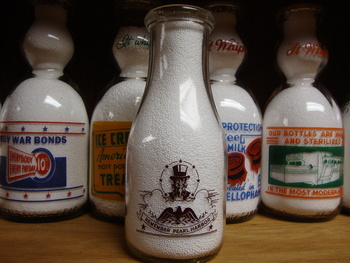 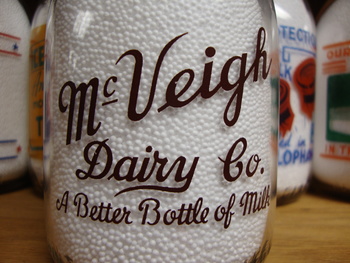 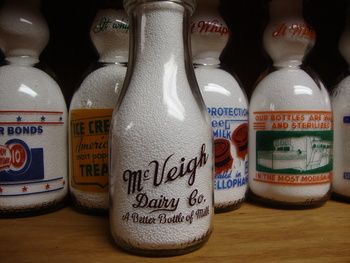 Having collected milk bottles over 30 years, I was aware that there are fake war slogans that have used the McVeigh Dairy name on milk bottles. One example of the fakes is Hitler being hit in his eye by EVERYBODY/EVERY PAYDAY 10% target, another example of the fakes is a cartoon soldier & caption "YES ADOLPH WE'RE COMING", with another example involving a COAST GUARD slogan. The dairy name on the front side also looks different than the front of the real examples.
I have four authentic McVeigh Dairy bottles that feature pictures from the WILD FOLK series design, so I knew 100% that actual bottles from the McVeigh Dairy exist. McVeigh Dairy was located in Chicago Illinois. I contacted another milk bottle collector who is extremely knowledgeable on bottles for his opinion. After a few back & forth phone calls along with internet checking, we both thought "WOW..THIS PEARL HARBOR BOTTLE IS THE REAL DEAL!!!!." Embossed on the bottom of this bottle is "15" like my other real examples. Around the base is embossed.."one pint liquid sealed. PROPERTY OF AND FILLED BY McVEIGH DAIRY CO. CHICAGO ILL." My other McVeigh Dairy bottles have the McVeigh Dairy embossing except they say "one quart liquid sealed".

Neither of us have ever seen this picture with a REMEMBER PEARL HARBOR slogan until now. It is purchases like this that keep "the thrill of the hunt" strong in milk bottle collecting.