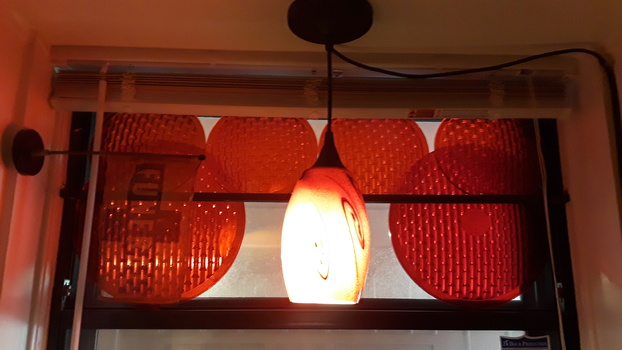 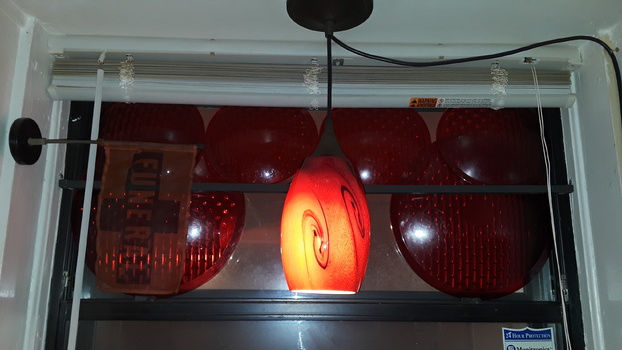 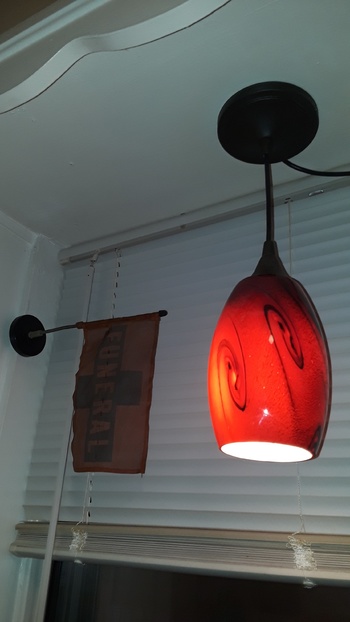 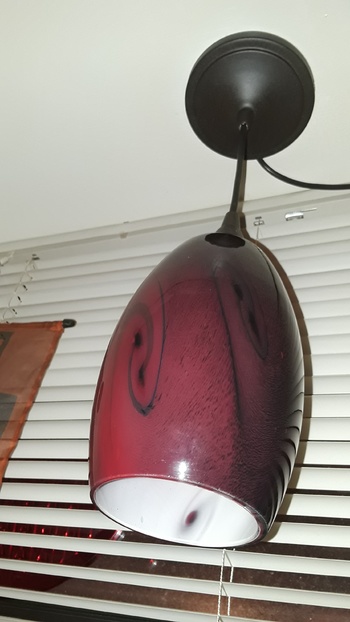 SEVERAL THINGS GOING ON HERE but this shown mostly for the red pendant light, maybe as inspiration to antiquesandcollectables38 as an idea she might use to display her recently shown pretty glass (in similar color scheme) shades.

Mine here isn't anything "old" at all -- in fact it was found just a couple yrs ago at my local Re-Store as new-old-stock. Frankly I've always imagined it was surplus from some electrical contractor's job somewhere, and might have first been intended to hang over a table at a fast food restaurant. (Popeye's Chicken often uses similar lights in their places anyway, and they're not alone?!) Probably Chinese made, it is of 'cased glass' with a mostly white interior, its exterior featuring a vibrant blood red color with dramatic random black swirls. It measures 7" long and is 3-1/2" across its open end. The fixture it came with is a pretty standard thing (its canopy 2-3/4" across at the shade) currently available at nearly any home center, to accept a variety of light sources.

TO ITS LEFT is my old orange "funeral flag". It measures roughly 9" x 5" and is actually made of some sort of synthetic 'mesh' material with its cross logo printed on. It is attached to a roughly 10" 'shaft' which is actually a stiff but slender spring, mounted to a magnetic base. I'm not sure if they do so anymore, but 'back in the day' funeral directors would affix flags like it to the hoods of cars leaving a church/funeral home for the motorcade to the cemetery, as means to help other random drivers along the way show their respects in traffic.

IN THE BACKGROUND serving as "window dressing" ;-) behind the miniblind are half a dozen authentic red railroad crossing light lenses. Only semi-vintage now, these are all made of clear red polycarbonate plastic and would have been 'in service' within relatively recent decades, just before most railroads began to generally change out their crossing signal lights to modern LED based units. The four on the top row are 8-3/8" diameter, the pair on the bottom are 12" across, those both 'standard sizes' of such things. As it happens there is a floodlight fixture on my carport ceiling just outside this window which does an excellent job of making just enough average ambient light to keep them slightly sparkly even during evening/nighttime hours -- thus I've grown to *much* prefer them there, vs. any other kinda curtains or stuff that most people hang around their kitchen windows...?? ;-) ;-) <lol>