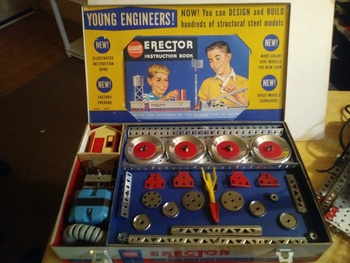 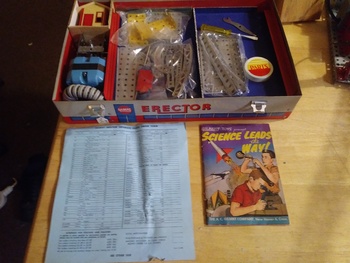 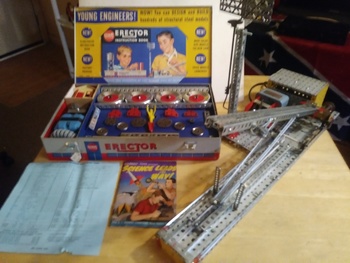 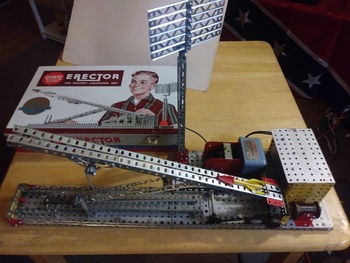 I'm picky about Erector sets, I won't pay much for unorganized boxes of parts that you can't gauge what's missing. I usually bite the bullet and pay more for one that's conplete and has all the cardboard/etc pieces that holds the parts. This set is in pristine condition and I paid just a little more for it than what they wanted for the same set that was junk.
This is Gilbert 50th Anniversary Erector Rocket Launcher set #10053 made in 1959. Gilbert changed from the long running red metal box with the "kneeling boy" on the front sets to lithographed boxes that pictured the theme of the set. Gilbert modernized their sets to have rocket, robot, radar, etc. themes to try to keep up with the space age. This set is basically a #6 1/2 set with a rocket added to make a Nike like launcher.
It is in excellent condition, barely used. Gilbert changed over from having the top trays being MN plates with organized parts T-clipped to plates, to the cardboard top tray around '58. These trays are hard to find, this set has one in great shape. This year the parts in the bottom compartment were just placed in bags, instead of being arranged on a cardboard insert. The manual cover was changed from the kids building the robot to the kids playing with the rocket launcher. This is an early '59 kit because the manual is inserted into slots on the cardboard header on the lid, later the manuals had a hole punched in them and were secured to a header with no slots by using a T clip. It also has the mini comic book "Science Leads the Way" that promotes Gilbert products.
The case is in great shape, these white color boxes show any mars or scratches. Notice the 50th anniversary sticker and how the sides of the box were lithographed to look like a building(Gilbert factory?) this year.
Showing the set is great, but I upped the ante and built a rocket launcher for the photo shoot. I built it from a partial 7 1/2 Erector Engineering kit, I added a block house and a few details, but the overall mechanism is the same as this kit built. The parts have a great shine and luster, vintage Erector sets, when in primo condition, make a great display item.

Thanks for viewing,
Bill