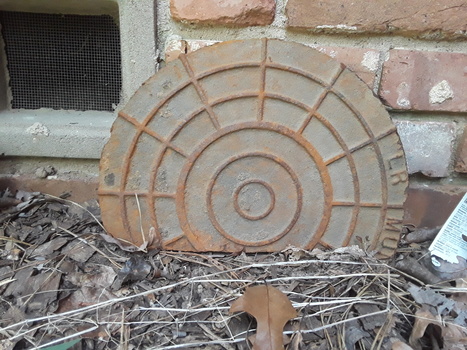 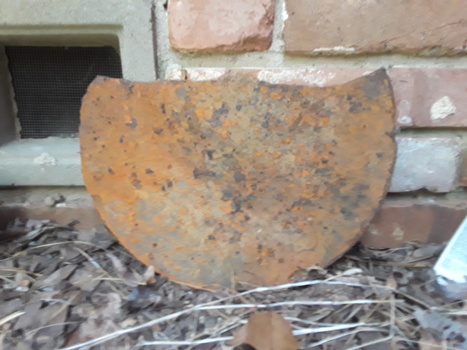 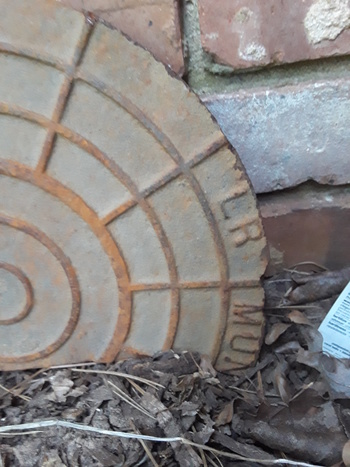 Until a few weeks ago, this was the iron cover over the little 'pit' in the sidewalk in front of the shop where I work, covering up the water meter/shutoff valve. It now measures about 13" at its widest, though was originally about 16" across and fully round despite its current shape/size.

It so happens that, due to its (former) precise (if accidental) location on said sidewalk, it *also* often ended up under one corner of our (4cu.yd.) trash dumpster on the one day a week we set it out to be emptied. THUS, after years' worth of the trash truck re-dropping the dumpster on it (and while already missing a few small chunks of its now further-gone half) the thing finally 'disappeared' completely one morning. In fact, its entire outer rim (which used to extend about 1.5" further outward from its now outside edge) finally gave way and cracked to pieces, leaving this chunk of it in the bottom of the hole atop our water meter itself.

Since *that* situation produced basically an 'open hole' in front of our business, which I'd rather not see get sued-to-death by some opportunistic "pedestrian', we set out an orange cone then got the water Co. going to ultimately replace it, which they did by installing an entire new and much sturdier 'meter pit'. :-)

And meanwhiles, I ended up with a fun new chunk of cast iron to join the other odd bits in my "flower garden". :-) Its only remaining lettering used to read "LITTLE ROCK MUNICIPAL WATER" (or somesuch) only a few letters of which now remain...the currently used lids of this size now bear the logo of the now renamed water utility. I tried (but failed, apparently?) to talk one of the crew guys to "accidentally lose" me one of those too, but he didn't bite... :-(