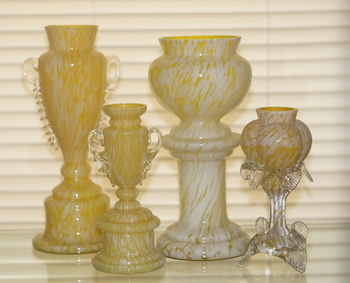 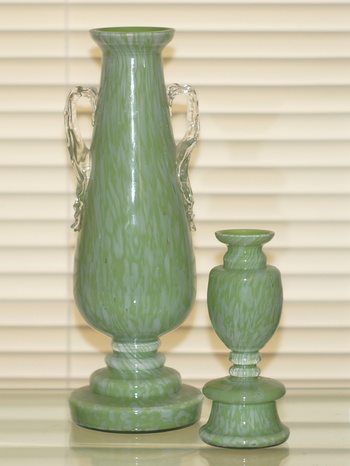 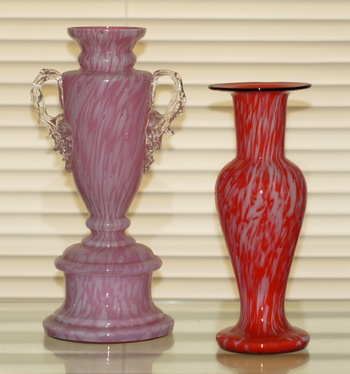 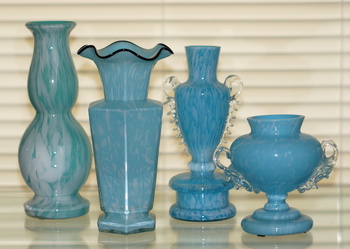 There has recently been some discussion of Welz decors in variegated colors. I thought it might be nice to add some additional examples from my personal collection of Welz production.

Let’s clarify one certain fact. Welz, Moser, Harrach and Loetz, and likely some others all made a version of a décor using both yellow and white. In the case of Loetz, Harrach and Moser examples, the glass is heavier, and the use of white is more of a marbled appearance than of a spatter. This opinion is echoed by a post in this forum by a well respected member that works on the Loetz advisory board for the website. Examples of production by those three companies can also be seen in this forum.

So where do I start? Let’s start with examples of Welz production in yellow variegated. The examples in the first image above are all Welz production. We have a Tri-lobed heart form, a single piece pedestal vase, and also two trophy vases in a common shape, but different sizes. A recent post in this forum also shows a large pedestal vase in the same basic size in a green and white décor, with the question of it being Harrach or Moser. I believe the green example in the other post to actually be Welz, like the yellow example above in a very similar shape and size as seen in my image here.

So the reasonable question would now be “Did Welz actually make a variegated décor in green and white? The answer to that question would be yes. Image 2 above shows 2 examples of a green and white décor. One example is a small trophy vase shaped example without any handles. The large examples, standing at about 10 inches is a Welz shape, uncommon in this large size, but found in a smaller version in quite a few different Welz decors.

So let’s move on to Pink and Orange as seen in image 3 above. Both colors done in a variegated décor. The trophy vase is also a 10 inch version of a shape found in a smaller size of around 7 inches and found in a wide variety of Welz decors. The orange version is found a handful of other Welz decors also. Although the pieces looks like it is a little red leaning for the color, in front of me it is a deep orange that leans much more towards tangerine than than red.

Lastly, let’s look at blue and aqua variegated decors. In this image the two examples to the right are shapes commonly seen in several other Welz decors. The octagonal vase with the decorated rim is an example of Welz production most often seen in a smaller form. The tallest example is a known Welz shape found in several Welz decors, but this example is in a kind of light aqua blue variegated décor. this is not a commonly seen color.

So while we see the yellow and white variegated décor in versions by several companies, the quality of the glass itself can help to determine who did, or did not make the item. We also know that in general, the enamel work on pieces by companies other than Welz, is generally higher quality, while the Welz enameling is generally more like a pastry bag décor done in fewer colors.

What we do know for sure is that Welz produced this type of décor in a wide variety of colors, while not really seeing examples in other colors from most of the other known houses. Is it possible that they made other colors? Sure it is. We just do not really see examples of it. Posting an image of a Welz example, and asking if it is Moser or Harrach, does not really make it so…… Wishful thinking does not make an attribution true or accurate.