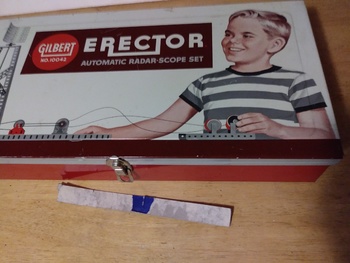 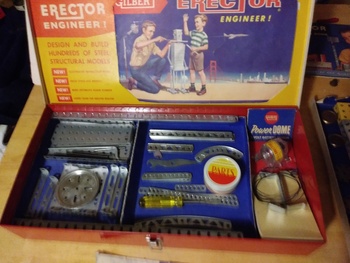 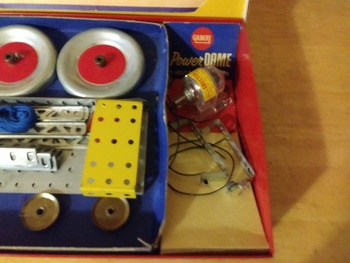 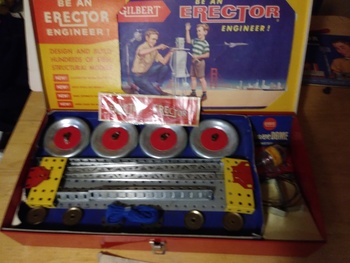 I got a great deal on this, I think. It was the guy I got it from father's set. It looks like it was barely played with. I haven't done an in depth inventory, but the only major parts I saw missing were two of the pulleys. I had some spare ones in my erector junk box so I replaced them. It's got all the cardboard(which is usually missing or severely damaged) but one side of the top tray is damaged, but the piece is there and it should be repairable(when I feel like repairing it. It's got the DC-3 motor in great shape with all of the foot mounting tabs intact. The motor, after a little massaging, works. This is no small feat, these motors are fragile and the majority won't even run. The general consensus in the erector community is that they suck.
It is a lithographed white box with cardboard so it's a '59. According to online reference it's basically the 5 1/2 set, which is relatively obscure. I figured it was the more common 4 1/2. The only odd number sets produced steadily were the 3 1/2 and the 7 1/2. The 5 1/2 and the rarer 9 1/2 were only produced for a few years. 60-61 had styrofoam instead of cardboard. It's early production because the manual is inserted in the slots intead of being held on by T-clips like the later one. The manual has the boys assembling the robot cover, all 59 manuals I've seen had changed to the rocket launcher cover. So I'm guessing this is very very early and they were using up all the robot covers they had. Ftapache shared one of these about 2 years ago before I became a CW member. He's got the later T-clip version and you can see the difference in the top insert. Judging by both of our sets, they evidently the 10042's didn't have the Gilbert 50th anniversary sticker like the 10053 set I shared. The 10042's have a smaller box and the sticker would have probably covered some of the litho.Speaking of Ftapache, I know he will soon comment and I couldn't see the manual cover in his post. I would like him to comment if his set has the robot or missile launching cover. I'm trying verify if they used the robot cover for any length of time. 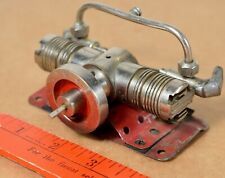 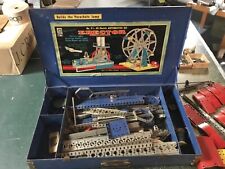