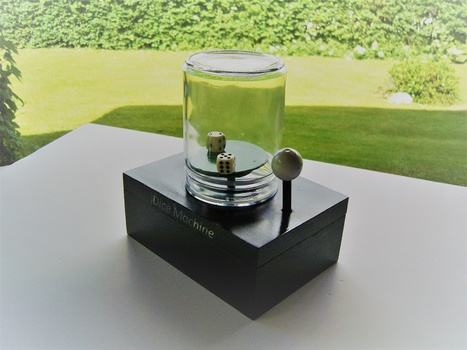 Dice machines were popular in bars around 1900. They were used for gambling about cigars. Today they're rare. I'm neither a bar guest, neither a gambler, nor a cigar smoker. But a rather dull person. So I decided to make a dice machine only as a pastime, without really having anything to use it for. Foolish. You push down the white ball and release it. Then the piston throws the dices up in the air and they fall down randomly. It works. The spring power is delivered by a clothes-peg hidden in the black box. You can probably make a much better version.