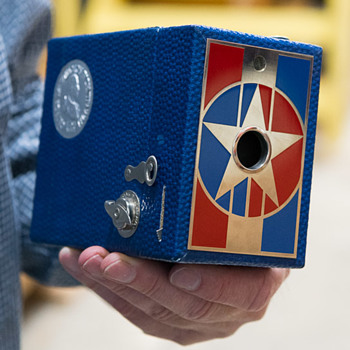 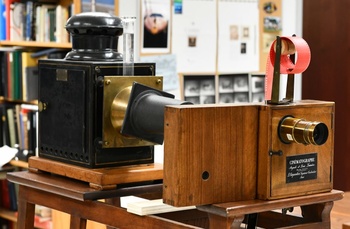 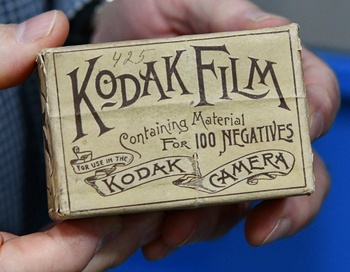 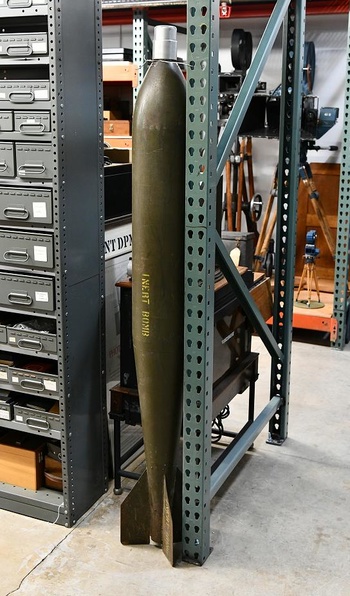 Over the years of collecting early (pre-1900) cameras, I’ve visited the George Eastman Museum collection several times and talked extensively with its Technology Curator (Todd). Always courteous, Todd helps with my research projects and escorts me into the archives to view their unequaled collection of photography and cinema equipment. It’s always a privilege and, given the vastness of the collection, I always see new things.

This month (June, 2019) while traveling with my family in an RV (recreational vehicle), we stopped in Rochester, New York; otherwise known as the mecca for all things Kodak. My family (including wife, son, his wife and granddaughter) toured the world famous Strong Museum. Of course I called Todd at the Eastman Museum to learn if he was available.

Todd’s office is just outside of the climate controlled archive (underground) and we did some catching up. It had been several years since my last visit. He demo’d an incredible 1896 Lumiere Cinematographe and, once again, I got a chance to walk the aisles of one of the greatest and largest photographic equipment collections on the planet.

This time, I got up close to four rare pieces of history that were familiar to me but had not taken the time to look at during previous visits.

The first picture is one of the rarest of all Kodak roll film cameras; the "George Washington Bicentennial (1732-1932) No.2 Rainbow Hawk-eye". Only two examples were made by Kodak Ltd. in 1932 and the decision to stop the project was due to poor economic conditions. It is gorgeous in real life.

The second image is of a rare 1896 Lumiere Bros. Cinematographe. Historically, these hand-cranked combination projector/cameras started the movie industry. (As a note, the Cinematographe used film as opposed to the earlier Edison Kinetoscope that projected rapidly moving photographs.) Earlier in the morning, Todd demo’d the projector to a group of Rochester Institute of Technology cinematography students. He also demo’d it for me. The projector was loaded with a reproduction of one of the museum’s original movies. It was stirring to know this is how the motion picture industry started.

The third picture shows an amazingly rare unopened box of roll film made for the original, landmark 1888 Kodak Camera. It’s remarkable how something like this survived.

And the most interesting item is saved for last. It’s not often you see a bomb shaped object anyplace, let alone in a photographic museum/archive. But there it was; nearly 6 feet tall, olive drab in color with “INERT BOMB” stenciled in yellow on the body. Huh? It ends up this is a World War II “photoflash bomb” used for aerial night photography reconnaissance. Did they ask everyone on the ground to say “cheese” before dropping this? Regardless, it’s an interesting bit of history.