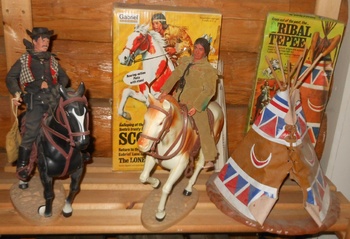 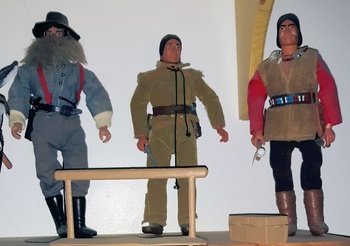 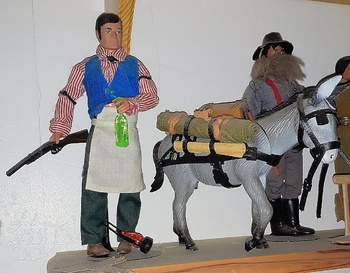 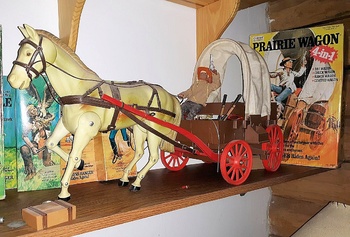 The Gabriel Lone Ranger series were released in 1973. If not close to that then. This was a 10" figure line as opposed to the usual 12" figures. Although Mattel was making the Big Jim line which was also a 10" figure. Anyway this is a toy line that stayed under the radar for a long time. I used to be able to get these pretty cheap but prices have doubled. There were several characters and accessory sets and all were well done.
The characters included The Lone Ranger, Tonto, Dan Reid (Lone Ranger's nephew), Little Bear (Dan Reid's Indian brother, that is what the box says), and his enemies Butch Cavendish and Red Sleeves. There are some other figures which are rare and I think were non US figures. In the UK this was made by Marx UK and somehow Hubley fits in.
In photo #1 we have Butch Cavendish and his horse Smoke, Tonto and Scout and the Tribal Wigwam which is actually a teepee.
Photo #2 Is the Lone Ranger in his prospector disguise. That is a really neat set, comes with the burro in photo #3. Next to him is Tonto and on the right is Red Sleeves his noble foe.
Photo #3 is the Lone Ranger in his bartender disguise. He has a double barreled sawed off shotgun. I wonder if he shoots the guns out of people's hands with that. Also the burro mentioned in photo 2. Looks like I need to hang the lantern on it.
Wrapping it up is the 4 in 1 Prairie Wagon being driven by Dan Reid aka Danny Reid. It is in Chuck Wagon configuration. It can be a buckboard, covered wagon, ore wagon or chuck wagon. Has lots of nifty features.
Individual posts for these will be posted eventually.
Post #2,000 coming soon What should it be?