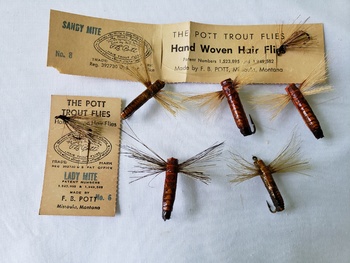 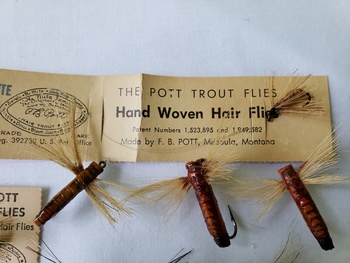 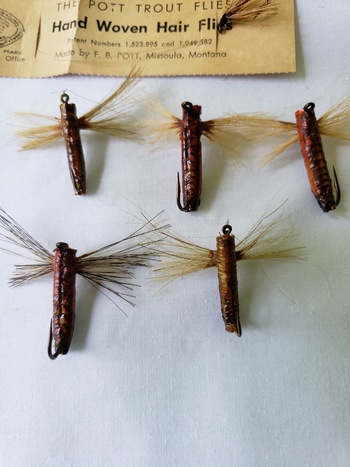 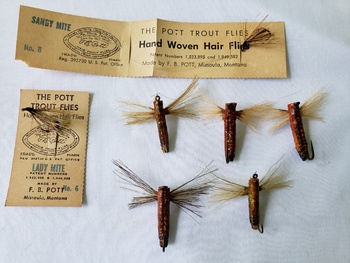 These were purchased this weekend at an Estate Sale here in Orlando, Fl
There are 2 flies on cards that are made by F.B. Pott
There are 5 Files that is believed to be Paul Bunyard Early 1920's Trout flies

Norman Means was born in West Virginia and moved to Montana in 1912 and later studied forestry at Montana State University. As a Missoula resident, he owned and operated a fishing store in town using his popular nickname "Paul Bunyan" Fishing Tackle. The business featured a logo with the famed Bunyan Blue Ox. Norman was an innovative fly tyer and custom bamboo rod builder who's flies and rods became prized possession for anyone lucky enough to own either.
Around 1923 he began tying his famed cork bodied flies to represent the salmon flies and other large aquatic insects of the greater Yellowstone region. This group of flies was marketed under the name Bunyan Bugs. The Bunyan Bug was most notably featured in the famed film A River Runs Through It. This film highlighted the life of another Norman, Norman Maclean.
The cork bodied flies produced by Norman Means had horsehair wings and were originally drawn with a body pattern representing the segmentation of these large adult bugs. Later Norman developed a special tissue and decal that was applied to the cork body to make the uniform pattern easier to execute and increase the production capability of these popular bugs. His Bunyan Bugs were the predominant fly used by locals in the region to imitate the salmon fly emergence
Reference Spencer Welt