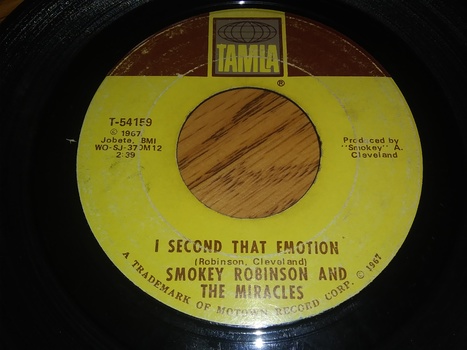 Born in Detroit, Michigan, It did not take long for Mr. Robinson to make the scene in the world of Music.
He began in 1955 with a group called The Chimes, later changed to The Miracles.
Smokey would leave the group to perform solo in 1972.
"I Second That Emotion" was released in 1967 on the Motown subsidiary label, Tamla, a label that Mr. Barry Gordy originally founded around Mr. Stevie Wonder, of whom Barry took to his wing.
This single charted very well. It was written by Mr. Robinson and the group The Temptations and Miss Diana Ross both did covers of the song.
A great song and I will second that emotion!!