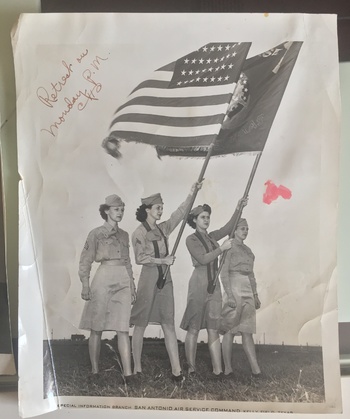 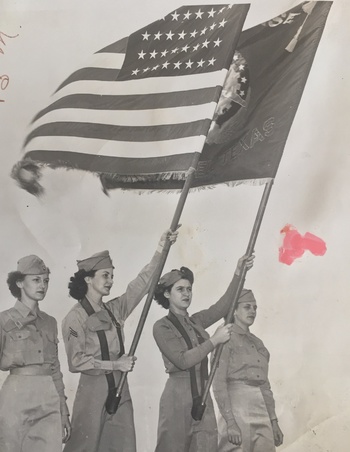 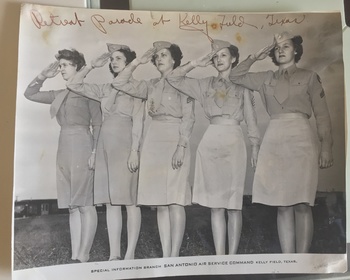 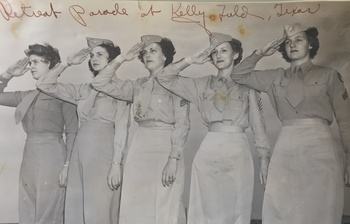 Found these at an Estate Sale in Texas. Researched a little about Kelly Field, Very interesting. Look at the U.S. Flag, Thee lower roll of stars appear to be 8, I know the top of the photograph was chopped, But 8 stars across the Bottom?? Any ideals to the year this was take. My research Notes: By the summer of 1942, congestion caused by the close proximity of four flying fields - Duncan, Kelly, Brooks and Stinson - had become dangerous. Consequently, in March 1943, Kelly and Duncan were merged under the name of Kelly Field. Kelly Field's primary functions became that of maintenance and supply. This was a major change in mission for Kelly as flight training moved elsewhere.

This new mission turned the base into a huge industrial complex. A new organization, the San Antonio Air Service Command, managed the increased supply and maintenance workload. Kelly's maintenance shops worked on thousands of Army aircraft, including B-17s, B-25s, B-29s, P-51s and the C-47 cargo plane. Rapid production lines established a rate of overhaul on accessories, bombsights, guns and electrical equipment that set records for both military and commercial repair agencies.

By 1944, Kelly's workforce had grown tremendously. In 1939, old Duncan Field had 1,100 civilian employees and only 10 military personnel. By 1945, more than 15,000 civilians and 16,000 military personnel worked at Kelly. During World War II, nearly 40 percent of the workers at the field were women. "Kelly Katies" were the Kelly counterparts to "Rosie the Riveters," women everywhere who did non-traditional work, contributing greatly to the successful war effort. They worked in nearly every shop at Kelly, including engine overhaul.