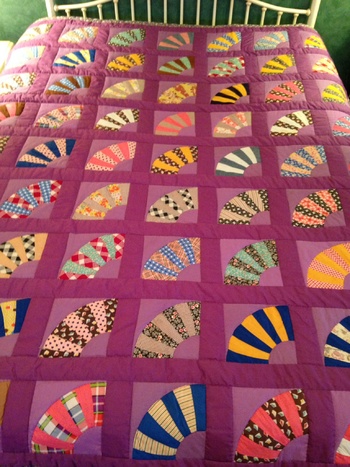 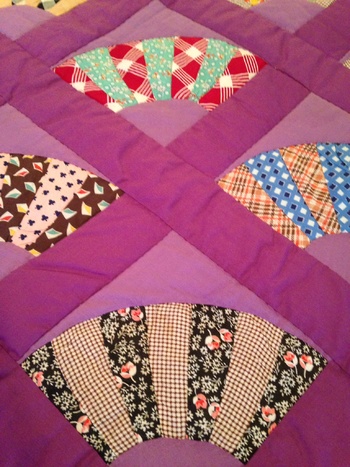 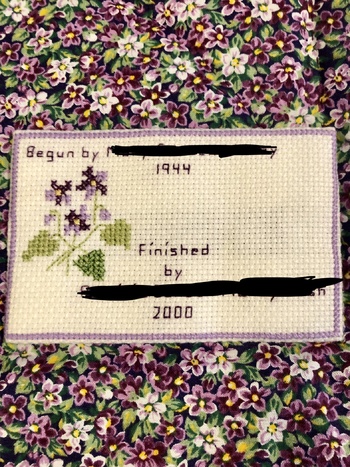 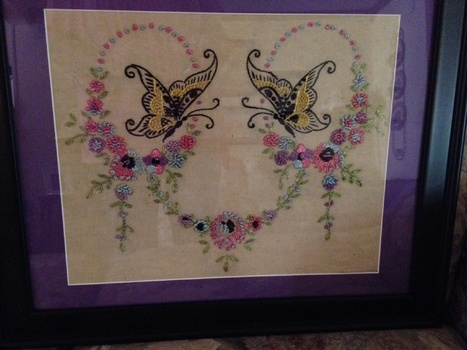 She had started the project in 1944, during WWII. It was one of several of her sewing projects that I inherited. She died shortly before my birth and I was named in her honor.
When I became an adult, quilted and was known as a good seamstress, the elderly relative who had saved the quilt pieces and embroidery pieces gave them to me.

I was too busy with family and career so I, too, left everything in the box for about 20 more years.
The year 2000 came about and “Y2K” seemed to be the year this work must get finished!

I was able to very closely match her lavender pieces so I could complete some of the squares.
I thought purple would be pretty to join the squares.
My aunt was a lively, lovely lady; in photos I have of her, she’s in pretty dresses, just the right makeup and shirt wavy hairstyle of the 1940s.
She may have planned to-use unbleached muslin as a backing since that is the kind of cloth other ladies in my family used as quilt backing at the time. Muslim was just a plain woven fabric; nothing fancy, inexpensive and the back side of the quilt didn’t need to be fancy.
I felt the need to give her quilt a pretty backing as a tribute to her so I chose a colorful floral cotton fabric. All her fabrics are cotton: probably sewing scraps and maybe some flour-sack scraps.
I did all the quilting by hand as I learned to do by observing my grandmother when I was a child. I knew that’s how my aunt would have done it.
I always cross-stitch a small label to sew into a corner of my quilts’ back with year made, by whom and for whom....so no questions about it in the future.
The finished quilt size is 65”X 82”.

I think she would have liked the way it turned out. It’s a treasure to me!

The same aunt made this embroidered butterfly and flower piece. I received it decades after her death. It had been rolled up and put away all those years ago.
From my observation of her stitching, I believe the black floss is cotton but all the colored floss is silk.
I was afraid to try to clean the slightly discolored spots so I had it matted and framed just as it was.
She had not embroidered her name on it so I wrote all the ID info on the back of the frame.

I hope you enjoy!
I welcome any comments. :-)