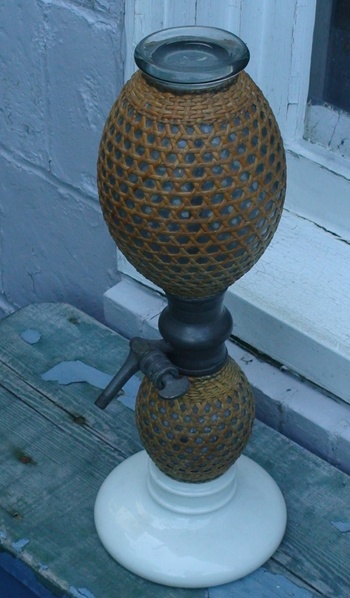 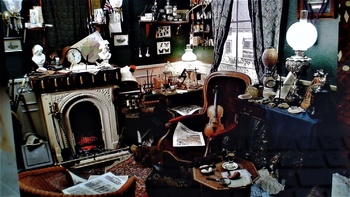 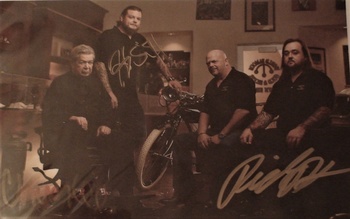 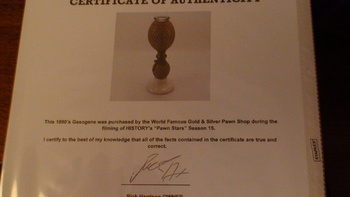 Description: Victorian era gasogne. This gasogene is a Victorian era device used to carbonate water for use with mixed drinks. Approx 17" tall and wrapped in wicker. Item was featured on the History Channel's "Pawn Stars." I am still looking for the episode. This was purchased from The Pawn Star's shop.
Dimensions: 17" tall
Date: 1890
From a collector of Sherlock Holmes-era items who had an entire room in his home made to look like the Baker Street home of the character. This Gasogene, is a Victorian era device used to carbonate water. When Sir Arthur Conan Doyle described 221B Baker Street, the residence of Sherlock Holmes, he mentioned several items including a gasogene. Specifically in the story “A Scandal in Bohemia,” Watson stops by the Baker Street home. “ With hardly a word spoken, but with a kindly eye, (Holmes) waved me to an armchair, threw across his case of cigars, and indicated a spirit case and a gasogene in the corner."
From the Internet:
Device that was used to produce carbonated water sometimes used for pharmaceutical purposes. Glass, ceramic and wicker. These had a tendency to explode (hence the wicker casing) From the Web : The gasogene (or seltzogene) is a late Victorian device for producing carbonated water. It consists of two linked glass globes: the lower contained water or other drink to be made sparkling, the upper a mixture of tartaric acid and sodium bicarbonate that reacts to produce carbon dioxide. The produced gas pushes the liquid in the lower container up a tube and out of the device. The globes are surrounded by a wicker or wire protective mesh, as they have a tendency to explode.
TO SHERLOCKIANS and other high-living Victorians, the gasogene is a piece of barware, a gadget producing carbonated water for mixing with whisky. To automotive historians, a gasogene was the answer to wartime shortages of gasoline, a means of producing combustible gases on-board by burning coal, charcoal or wood. And to motorsport enthusiasts of similar historical bent, the term gasogeno recalls coal-burning entries in two runnings, 1933 and 1936, of the famed Italian Mille Miglia cross-country race.
Gasogenes are found in all three, Sherlockiana, automotive history and historical motorsports.

The second photo is Baker Street West in California. A room set up for Sherlock Holmes. You can see the gasogene near the window.

A gasogene is mentioned as a residential fixture at 221B Baker Street in Arthur Conan Doyle's Sherlock Holmes story "A Scandal in Bohemia": "With hardly a word spoken, but with a kindly eye, he waved me to an armchair, threw across his case of cigars, and indicated a spirit case and a gasogene in the corner." One is also mentioned in "The Adventure of the Mazarin Stone". The device plays a key role in Bernard Shaw's 1905 comic play Passion, Poison, and Petrifaction, Or The Fatal Gazogene.
The word is also used in Douglas Preston and Lincoln Child's novel Brimstone, published in 2005, on page 106.
A gasogene is mentioned, on page 13, as being in the forensic laboratory of Dr. Kingsley, consultant forensic examiner of Scotland Yard in the 2012 fiction book The Yard.

Update: I was about to throw away the box this item arrived in when I found the Pawn Star's autographed photo and the authenticity stating that it was sold to the Pawn Stars during season 15. If anyone can find this episode please let me know.