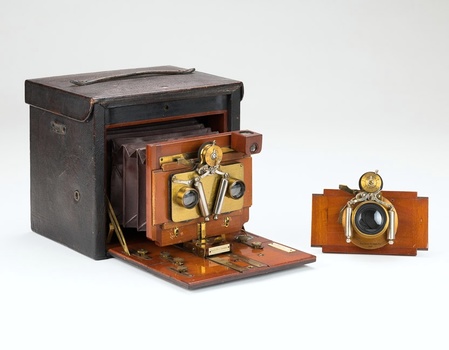 There are only a few Kodak cameras I desire and a nice example of a No.5 Folding Kodak Stereo has been on my “most wanted” list for over two decades. They are incredibly rare and the few in collections are never for sale. Earlier this year while visiting a friend and admiring his collection, I made a comment to call me if he ever decided to sell the excellent example on his shelf. Just as I was leaving, he offered me the camera!

The Folding Kodak series were introduced in 1890 by George Eastman. The innovative self-casing design was the first to garner wide public acceptance. Throughout the 1890s, other makers created cameras similar to the Folding Kodak series. But it is this “satchel” body form that is the most distinctive of all. (A No.4 Folding Kodak in my collection is also posted on Show & Tell.)

The No.5 model made 7 x 5 inch images on glass plates or 54 exposures (same format) on roll film. Regardless of the format size, most are found in fair-to-poor condition. The example shown here is in excellent condition. It includes both single and stereo lenses as well as its original roll film holder (inside the body) with a serial number that matches the body.

The stereo model was introduced in 1893 and it is the only year in which focusing is done with levers instead of the more traditional rack & pinion focusing knob. Two separate levers can be seen on the drop bed; one for a single lens and another (at the rear of the drop bed) for the stereo lens set. In use, the levers are somewhat clumsy to operate and this might have been the reason the camera was redesigned in 1894 (and onward) with a geared focusing knob. These later versions are listed in Kodak catalogues as “Improved.”

Overall, the No.5 Folding Kodak is a large, handsome camera selling in 1893 with a single lens for $75. Adding the stereo lens/shutter set increased the price another $18.50. Adjusting for inflation, the 2018 total price is roughly $2,600.