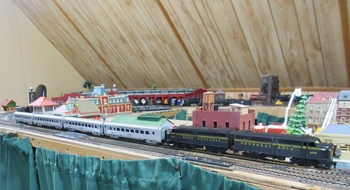 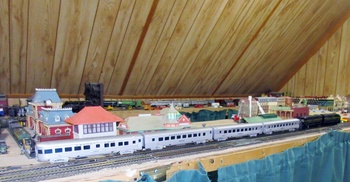 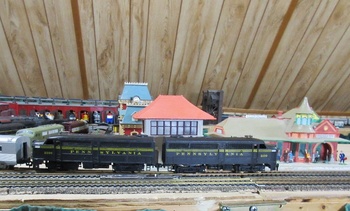 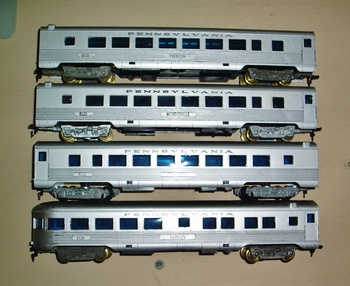 HObbyline Train Set #456; "The Trail Blazer". HObbyline was in business from 1953 to 1957. A Pennsylvania Railroad set by HObbyline using their Alco FA-1 locomotives referred to by HObbyline as Twin-Fa-1's. The pair of Alco FA-1's I show were painted in Brunswick Green. HObbyline referred to them as Black. The locomotive power is followed by 3 Pullman cars, and a Observation car. All four cars are named and numbered. They are named after 4 station stops along the Jersey City to Philadelphia route. Two on them in New Jersey, Two in Pennsylvania. The cars types,, names, and numbers are these. Pullman, Trenton, #8100. Pullman, Princeton, 8110. Pullman, Morrisville. #8120. Observation, Yardley. #8130. The manufacturer of HObbyline was John A. English. This company was located in Morrisville, PA, directly across the Delaware River from Trenton NJ.