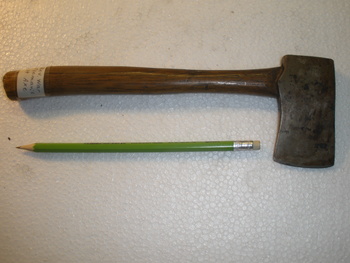 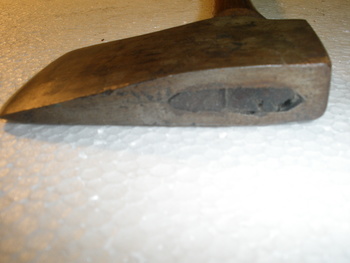 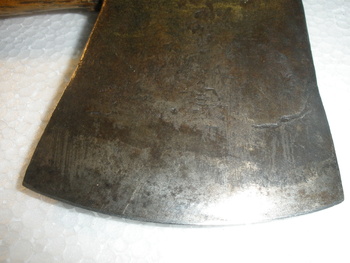 This is a belt axe, sometimes called a bag axe, because they were often kept in the rifleman's rucksack, or possibles bag.. They were mostly carried on the belt of a revolutionary soldier or a colonial frontiersman. A frontiersman who carried a Pennsylvania rifle needed a handy secondary weapon because it took longer to load a rifle than it took to load a musket. This gave him a little edge and the enemy knew that he had this secondary weapon at hand to use in short notice.
These axes were small, (as shown compared to an ordinary pencil) and I find it hard to believe that they could do too much damage because of their size, but, if kept sharp, they might be an added protection for their user.
This axe, like most other belt axes that I have seen, is made by a hand forged fold weld using wrought iron for the body and a steel insert for the blade edge. Steel was rare and hard to come by, so, the body was usually made of a more available metal. This process also made the tool more durable better to take the shock of chopping without shattering.
I try to show the inserted blade edge in photo #3, it's kind of hard to make out.