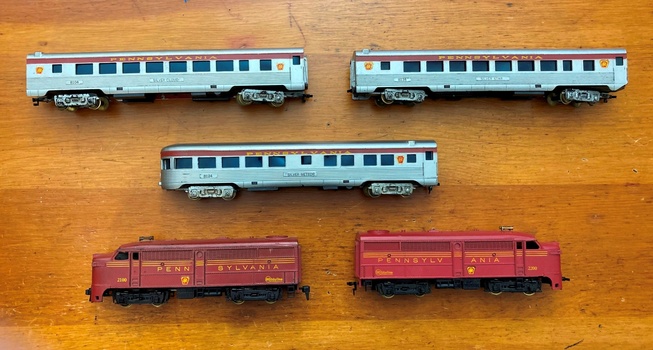 HObbyline train set #431 "The Silver Meteor", this is a second Pennsylvania Railroad set HObbyline made using their, at the time, newly produced streamline passenger cars. In the first set "The Trail Blazer" # 456, all silver cars were used with black lettering. There were two different body types. One is the Pullman chair car. There are three and are numbered and named, first being the #8100 Trenton, then #8110 Princeton, last #8120 Morrisville. The second type car is a Pullman observation car which is #8130 Yardley. On all cars the Pennsylvania road name is printed above the windows in black. These cars can be viewed in a previous posting I made here. This set "The Silver Meteor" was released using Twin FA-1 diesels in Maroon (red) paint with yellow lettering, 2 chair cars, and an observation car. These all silver Streamliners differ from the other set with a red stripe above the windows with the railroads name printed on it in yellow. Individual names and numbers for this set are chair cars #8104 "Silver Cloud", and #8110 "Silver Star". Observation car is #8124 "The Silver Meteor" The name which this set is named for.
edit; 7-26-21. I replaced the dark original posted layout photo with a better and easier-to-see presentation-type photo.