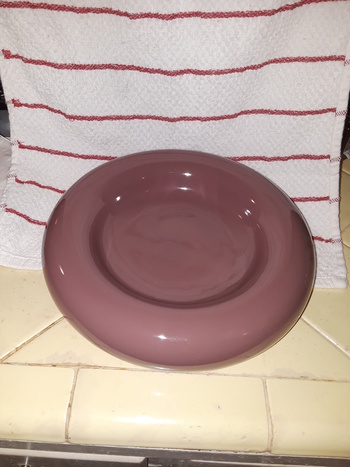 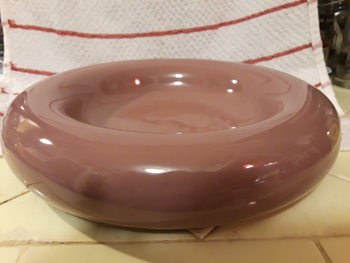 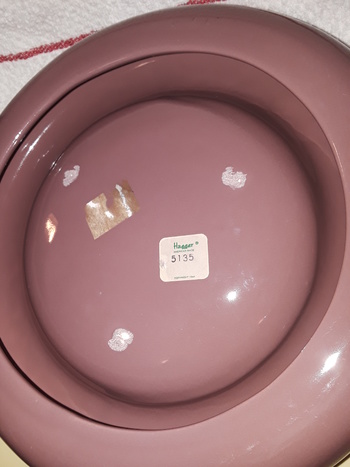 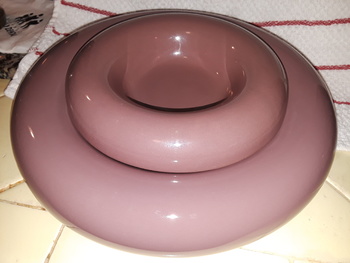 Another cheap Goodwill find recently -- I thought I recognized its color immediately and wasn't surprised at all to find the HAEGER label on its underside when I picked it up off the shelf to look. :-) I'm nobody's actual HAEGER expert BTW, just that they were semi-local to the area where I grew up, so I now find myself tending to be able to recognize (and snag, if appropriate) their work. It is not at all unlike another smaller HAEGER bowl I've already shown here:

and in fact the number 5136 on its label would suggest it is indeed the next-largest size of a set of "3 nesting bowls" that Haeger apparently offered during their lifespan. (see the link for more info on that) This example, though the same exact glaze color, I'd suspect to be of much later actual manufacture because Haeger seemed to have abandoned the 'molded in' name/# to their pottery in the later years of the company. The paper label indeed reads "COPYRIGHT 1984" in the tiny print at its bottom. The glue (only) of another sticker still remains on its bottom, also 3 little flaws in the glaze where it probably sat on something in the kiln while being fired. (another characteristic which is seemingly common with later production Haeger ware) It is a little over 10" across, a little under 2" high.