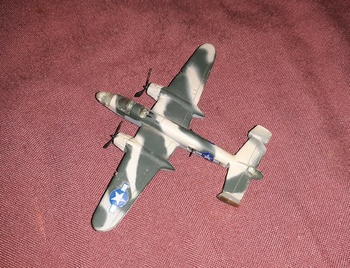 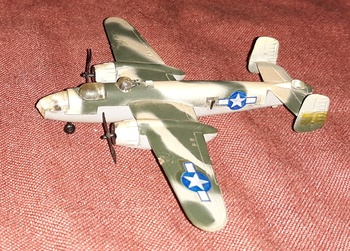 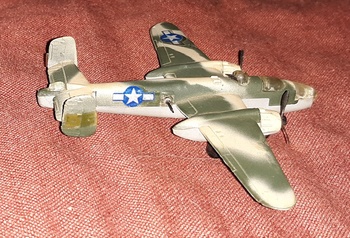 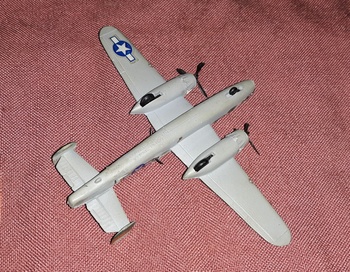 Don't even think about mentioning that one raid when this plane did so much more and much more successfully. Plus this isn't a B model, looks like J model.
The B25 was the opposite of the WWII German bombers and the Japanese Betty bomber which were its medium bomber counterparts. While the others had a handful of .30 cal machine guns these carried 12-13 .50 caliber machine guns. That's for a glass nose version like this. The solid nose versions had up to 18 .50 caliber guns. Not to mention the 75mm cannon. After Japan ran low on ships for the gun nose versions the B25 reverted to the old style glass nose with a bombardier. But even the glass nose versions had 7 forward firing guns. 2 mounted in the lower right of the nose and a flexible (means you can point it not a rubber one) in the nose. Also 2 mounted on each side of the plane under the cockpit. A B17 had 2 plus a perhaps a couple others. The front was generally considered the weak point of a bomber. One would not want to be in front of a B25.
Some other notes on the 1:1 version of this model. It is not as roomy as a B17 or B24. I have been inside one and I pretty much had to crawl through the tail section. Can't quite stand up straight to fire the waist guns. Plus one crewman mans both the waist guns and is also the radio operator. There were 6 crewmen.
Now as for this model. It has the top turret guns and the waist guns. They had a budget on these and every model had the same price. This model looks like it was more expensive to produce than the average model. Got 6 clear plastic pieces, twin tails, engine cowlings and larger than the average Mini-Plane so I'll rate it as pretty good. The paint scheme is the same as the photo in Wikipedia although I have never seen that paint scheme in person.
Not sure what I will post next but we will find out when I post it.