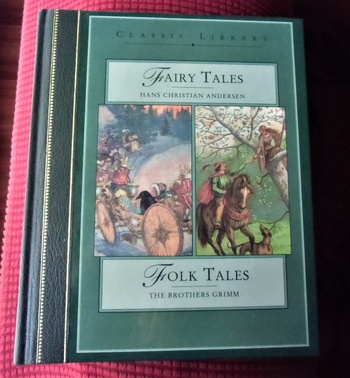 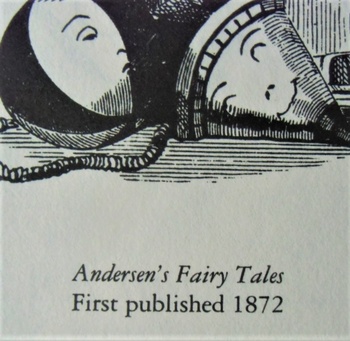 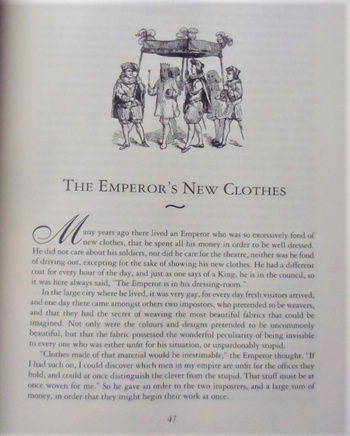 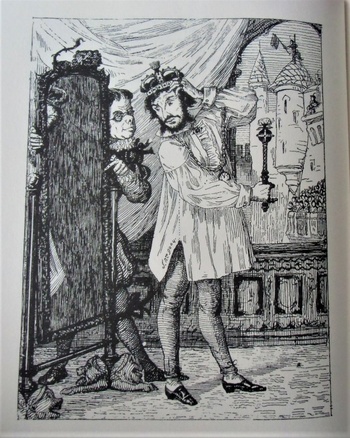 This will be more of Tell than a Show post.

I am still highly influenced by my youth's stories and tales. My dad was a big reader and I was the one out of four kids who also enjoyed it tremendously from the age of 8. His first book presents were newly published children's fairy tales, that were classics, as well as short stories by Edgar Allan Poe, etc.

This book is one I found in one of our local charity stores for a dollar. It was a reminder of what I enjoyed and learned from when young, as well as my dad's kindness. We moved often so the books I had often did not follow with the packing done by my mother.

Andersen stories included "The Emperor's New Clothes", a very popular tale that was published and translated in many languages. I will post some exerpts as well as a modern analysis of the plot and it's conclusion. This story had a great effect on me, I kept that value my whole life. Old fashioned maybe, but it colored my points of view and my behavior since.

What is ironic and maybe surprising is that the message is just as appropriate today, if not more, in our political climate, as well as our lifestyle beliefs and tolerance.

"The Emperor's New Clothes" (Danish: Kejserens nye klæder) is a short tale written by Danish author Hans Christian Andersen, about two weavers who promise an emperor a new suit of clothes that they say is invisible to those who are unfit for their positions, stupid, or incompetent – while in reality, they make no clothes at all, making everyone believe the clothes are invisible to them. When the emperor
parades before his subjects in his new "clothes", no one dares to say that they do not see any suit of clothes on him for fear that they will be seen as stupid. Finally a child cries out, "But he isn't wearing anything at all!" The tale has been translated into over 100 languages.

"The Emperor’s New Clothes" was first published with "The Little Mermaid" in Copenhagen, by C. A. Reitzel, on 7 April 1837, as the third and final installment of Andersen's Fairy Tales Told for Children. The tale has been adapted to various media, and the story's title, the phrase "The Emperor has no clothes", and variations thereof have been adopted for use in numerous other works and as an idiom; A vain emperor who cares too much about wearing and displaying clothes hires two weavers who claim to make the most beautiful clothes and elaborate patterns. The weavers are con-men who convince the emperor they are using a fine fabric invisible to anyone who is either unfit for his position or "hopelessly stupid". The con lies in that the weavers are actually only pretending to manufacture the clothes. Thus, no one, not even the emperor nor his ministers can see the alleged "clothes", but they all pretend that they can for fear of appearing unfit for their positions. Finally, the weavers report that the suit is finished and they mime dressing the emperor who then marches in procession before his subjects. The townsfolk uncomfortably go along with the pretense, not wanting to appear unfit for their positions or stupid. Finally, a child in the crowd blurts out that the emperor is wearing nothing at all and the cry is then taken up by others. The emperor realizes the assertion is true but continues the procession.

Maria Tatar observes that "The Emperor's New Clothes" is one of Andersen's best-known tales and one that has acquired an iconic status globally as it migrates across various cultures reshaping itself with each retelling in the manner of oral folktales. Scholars have noted that the phrase, "Emperor's new clothes", has become a standard metaphor for anything that smacks of pretentiousness, pomposity, social hypocrisy, collective denial, or hollow ostentatiousness. Historically, the tale established Andersen's reputation as a children's author whose stories actually imparted lessons of value for his juvenile audience, and "romanticized" children by "investing them with the courage to challenge authority and to speak truth to power." With each successive description of the swindlers'
wonderful cloth, it becomes more substantial, more palpable, and a thing of imaginative beauty for the reader even though it has no material existence. Its beauty, however, is obscured at the end of the tale with the obligatory moral message for children. Tatar is left wondering if the real value of the tale is the creation of the wonderful fabric in the reader's imagination or the tale's closing message of
speaking truth no matter how humiliating to the recipient." 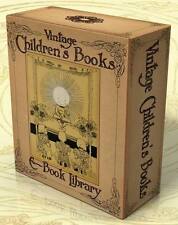 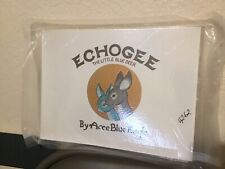 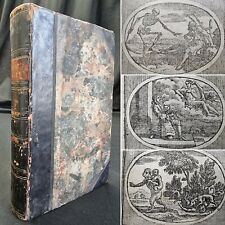