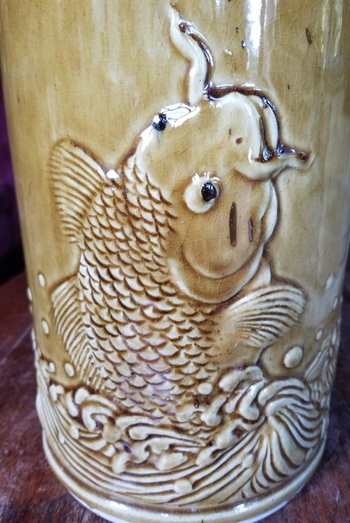 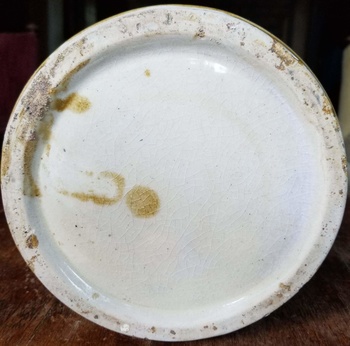 We purchased this 20+ years ago and have never been able to identify the maker. We liked the koi fish, jumping and peering upwards, and the motion of the waves and water droplets. Initially, we thought maybe it was made by one of the Ohio potteries, but over time we began to think it was perhaps made in China or somewhere else in Asia. The yellow glaze is a high gloss majolica type glaze (tin glaze). The interior color is the same color as the bottom, a light gray color. The bottom is unmarked, but there is an impressed number 12 toward the bottom rim under the glaze. The umbrella stand or floor vase is 17 1/2 inches tall.

One possible interpretation of this piece is that it is referencing the waterfall legend which involved a large school of golden koi that swam upstream in the Yellow River in China and were blocked by an enormous waterfall. They refused to give up and kept leaping to try to get to the top of it. After 100 years of jumping, one fish made it to the top and was rewarded by being turned into a golden dragon, an image of power and strength. Thus the leaping koi represent unflinching perseverance.