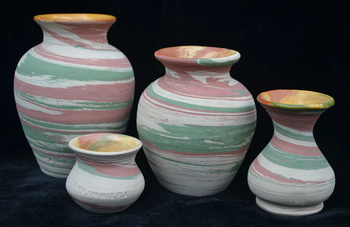 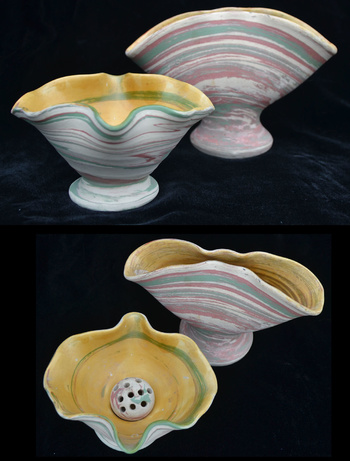 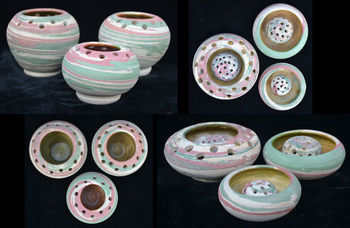 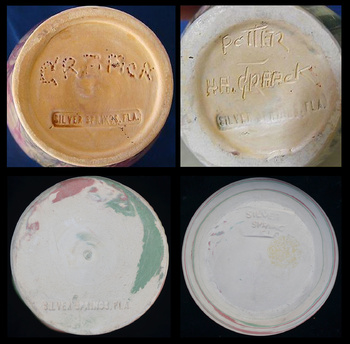 In 1921 Heinrich (Henry) A. Graack and his son, Henry Jr., moved from Kolding, Denmark to Bradentown, Florida. In Bradentown, they purchased the Manatee River Pottery facility, renamed it as the Henry A. Graack Pottery, and continued the production of unglazed, hand-painted decorative souvenir items. Their plans for national distribution fell apart and by 1924 the business folded. Henry Sr. returned to Denmark. Henry Jr. moved to New York and started a family. Sometime in the early 1930s, Henry Jr. was given the opportunity to operate a small pottery demonstration and souvenir stand at Fort Ticonderoga. In 1935, he was invited to spend Winters doing the same thing at the Silver Springs water attraction near Ocala, Florida. For a while he would travel between the two, spending Summers in New York and Winters in Florida. Eventually he elected to stay in Florida year-round where, assisted by his daughter Madelyn, he made his distinctive swirl pottery until his passing in 1966.

The Silver Springs Pottery products occupy one of the spaces between Art and Production pottery - kinda both, kinda neither. It was always a one or two person operation. For the most part the pieces are small, quickly thrown, low-fired items made with three-color blended clay with wimpy interior lightly colored transparent glazes. He favored vases and flower arranger bowls but there are plenty of eccentrically formed pieces and utilitaian items (from salt and pepper sets to cookie jars) as well. Larger pieces are scarce but can be found. The major part of his prolific output were sold as tourist souvenirs.

PIC 3 - A variety of posy bowls and low bowls with removable frogs. The largest posy bowl shown measures 3½" (9 cm) tall with a 3½" diameter. The largest low bowl has a diameter of 6" (15 cm). Henry liked poking holes in his work.

PIC 4 - These are the known Silver Springs marks. The pieces that are signed usually have a heavier drippy multicolored glazed exterior and are what Henry considered his art ware. He even signed his name poking little holes - the pieces with the incised signature were signed by his daughter. Most (if not all) pieces were marked with an impressed die-stamped "SILVER SPRINGS, FLA." in one line or three.

Identical swirled items can be found marked with an impressed "FORT TICONDEROGA". Henry Graack's production at Fort Ticonderoga was somewhat more varied than that at Silver Springs. Apparently he had a better kiln there and items are found with a variety of glazes and surface treatments.