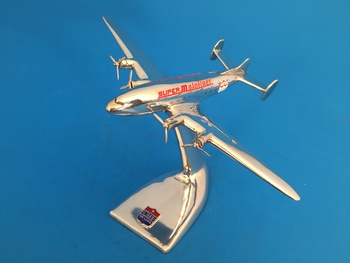 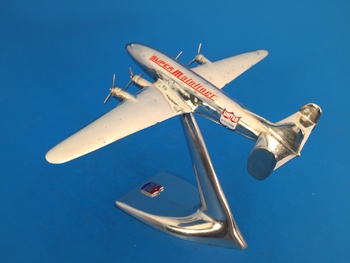 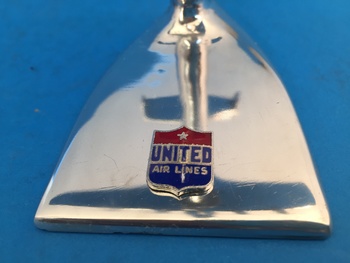 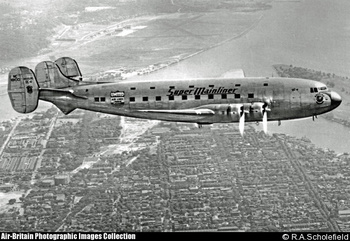 From a Chicago collection of United Airlines memorabilia comes this Chrome Douglas DC-4E agency model circa 1938. This was apparently crafted by either Douglas or United's own shops as a 'teaser' item based on the Pastushin DC-4E ashtray model. Even in the 1930's not every travel agent felt a need for an ashtray so a number of these were produced as an optional display. It is not a large model with a wingspan of approximately 8.00". United only used the airplane in route trials. Getting a chance to travel on one was much like the early flights in the Concorde in the 1970's... somewhat lavish and expensive. The airplane was air conditioned, pressurized, and even featured the first use of an APU (Auxiliary Power Unit) to keep passengers comfortable when on the ground. All features commonly found on current airliner design. In the end, United was the only airline out of five that actually flew the single prototype in service. It was eventually shelved due to high costs of operation and relatively low power engine technology. Douglas would revamp the concept into the simpler C-54 transport which was developed into the later popular DC-4, DC-6, and DC-7B family of airliners.
As a post script... Douglas accepted an offer from the Nippon Koku K.K ( Japanese Airline) to purchase the one-off DC-4E. It was then secretly delivered to the Nakajima Aircraft Company and thoroughly scrutinized for being inspiration for the G5N Shinzan (Deep Mountain) bomber design. To their disappointment the DC-4E derived bomber turned out to be hopelessly under-powered and to complex to maintain... ironically the same issues the American Airlines had concluded earlier. They ended their days as long-range transports for the Japanese Navy.