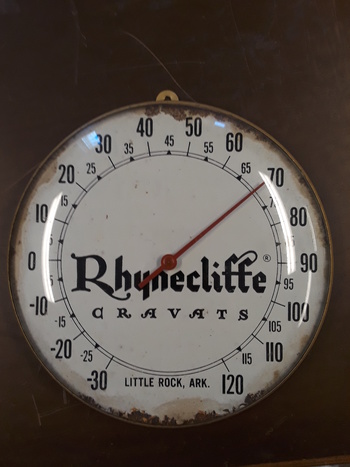 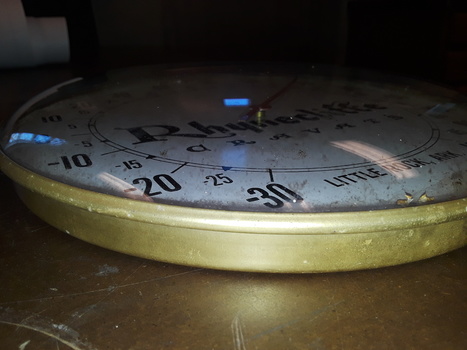 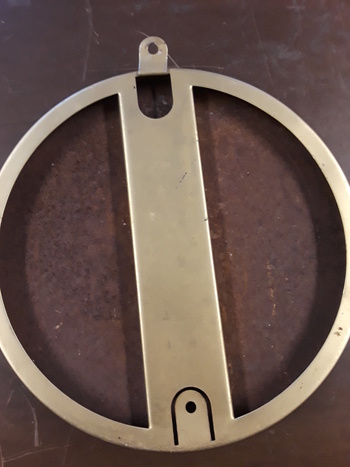 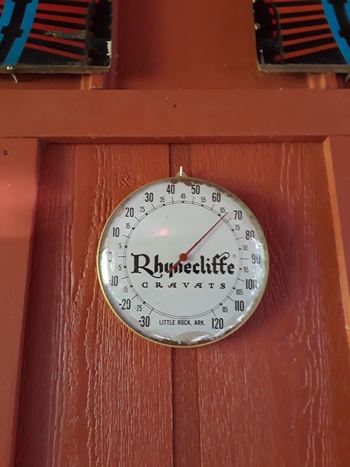 THIS ONE is turning out to be more entertaining than I'd have first thought, I think...? ;-)
When my friend remarked this morning: "oh, I almost forgot, I found something you might like" -- well, let's just say it was not an incorrect guess on his part...?? :-)

Measuring 10" or so across, this old thermometer advertises RHYNECLIFFE CRAVATS, also bearing the name of My Fair City on its face. Having absolutely no idea whatsoever at the moment what "cravats" is/are (and in fact first guessing maybe a brand/variety of booze?) a little bit of googling soon provided that answer -- a cravat is apparently an (early?) form of what's nowadays more commonly known as a men's necktie.

Postulating from there, apparently there was once a manufacturer of said garments (maybe even particularly high quality ones?) located here, or at least close by. I still haven't had time to further look into the whos/whens of RHYNECLIFFE to learn any more about that, or thus what general age range this thermometer could actually date to.

It is otherwise in pretty good shape, the domed glass is intact as well as seemingly irremovable by the way the whole thing is assembled, so all I did to it was gently clean its exterior for this showing. As seen, the paint on its face does have a few little 'fleabites/flakes around its edges now trapped in there though it remains basically fully intact. Its frame appears to retain its original goldtone paint, and the backside of its face is uniformly now rather rusty so any actual mfr's info that might have been there is now long gone.

ANY FURTHER INFO that our resident fashionistas (or anybody else) could offer about it would be greatly appreciated?!! :-) :-) :-)

Just changed out one of my original pics, to show the thermometer now freshly installed on my carport wall. It was still in process of 'adjusting' itself from the kitchen, as it shortly (and currently) was reading a somewhat lower number... :-(