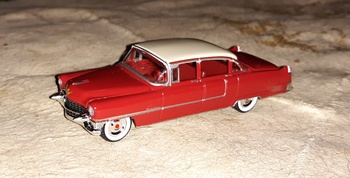 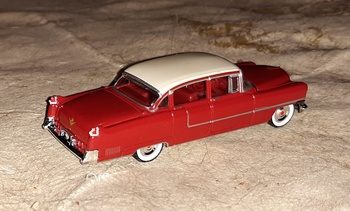 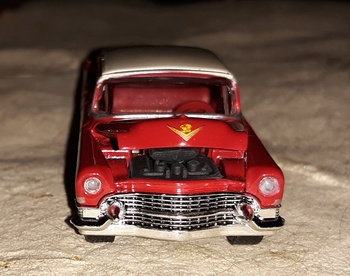 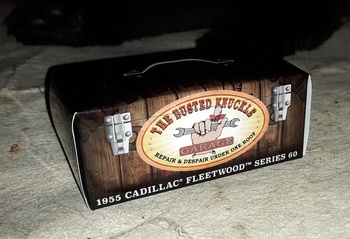 The Busted Knuckle refers to what one gets when restoring a vintage car. Happens with a lot of other things too that involves tools and things that don't want to move. It happens.
Now as for this model it is a 1955 Cadillac Fleetwood Series 60. The 1:1 version had a very large back seat area had an option with a divider between the front and back seat so it could be used as a limousine. It weighed ab out 4,700 lbs. It came with a 331 cubic inch V8 so it was not underpowered for the time. Hopefully it had a big gas tank. It got 11 MPG. Probably a good car to take to Palm Springs or Pismo Beach.
Back to this model, the actual model this time. It has the usual great detail. The hood opens but not very far to reveal the engine. The interior matches the 1:1 model, there are wing windows and detail paint for the trim, hood ornament and so on. Has some very large rocket tips on the front end and fins on the rear end. Rockets were in during the 1950s.
Now if they would do a few more travel trailers.