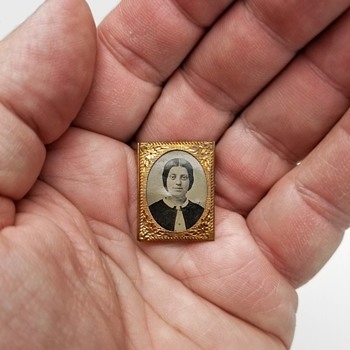 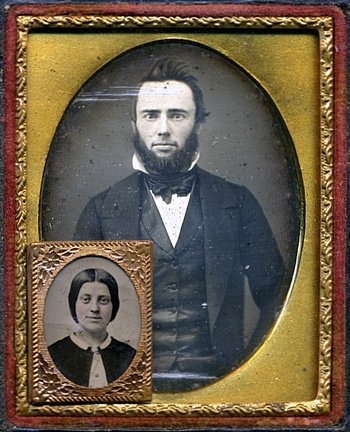 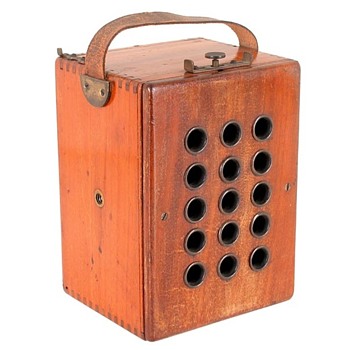 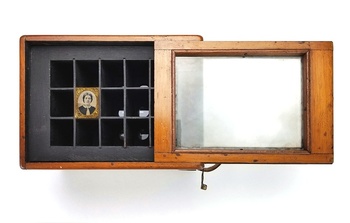 Oh my. It’s surprising what turns up when cleaning and organizing my camera collection closet. And as a specialist of early American photographic apparatus, I am amazed at the number of images that somehow snuck in and now accompany the cameras. Posted here is a tiny tintype I forgot about. Measuring a mere 3/4 x 7/8 inches inside a brass over-mount, it is the smallest image in my collection.

As photography matured since its invention, picture formats eventually standardized and the smallest of the standards became known as “sixteenth plate” measuring 1-3/8 x 1-5/8 inches. Really small images were advertised as “gem” formats. Yet some of the smaller sizes, such as this tintype, were sometimes referred to as “postage stamp” images. Putting it into perspective, the tintype is incredibly tiny when shown with the extremely popular 1/9-plate (2 x 2½ inches) daguerreotype gem format.

As a side note, also notice that the daguerreotype is brighter in appearance than the tintype. This is because daguerreotype images are formed on mirror-like surfaces of silver coated copper plates.

A few specialized “multiplying cameras” could produce postage stamp images. The American builder Simon Wing made several cameras capable of producing large numbers of very small ½ x ½ inch images on larger plates. His cameras had four to nine lenses, masks, and backs that shifted vertically and horizontally in very small increments. Unfortunately these Wing cameras are quite rare and I’ve been unsuccessful in acquiring one of his larger multiplying studio cameras for my collection.

In contrast to the larger, mechanically complex multiplying cameras, a few companies manufactured simple box-form cameras with 12 or 15 lenses capable of directly creating postage stamp format pictures in one shot. One example is the 15-lens Butcher Royal Mail Stamp Camera (in my collection and posted here on CW). It made 3/4 x 7/8 inch pictures on standard 3¼ x 4¼ inches glass plates. To achieve this, an internal septum forms individual dark chambers for each image. However, this postage stamp tintype was more likely produced by an earlier Wing camera (or similar) because the Royal Mail was designed for glass plates. Regardless, after the plate was developed, each image was then cut from its metal plate with a heavy pair of snips.