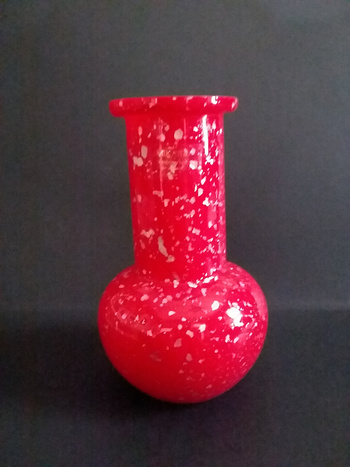 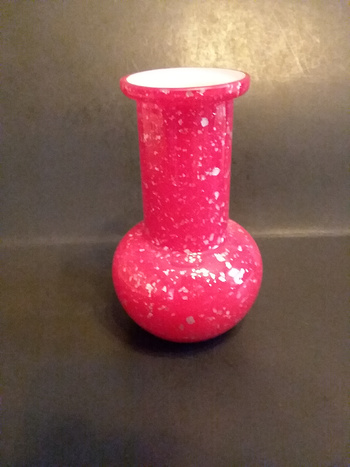 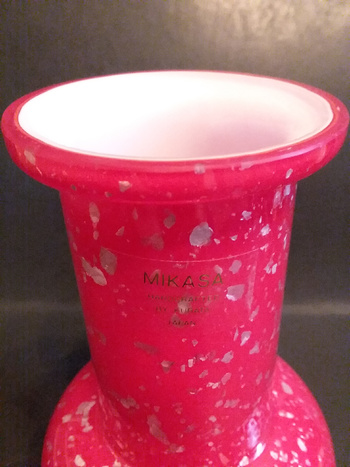 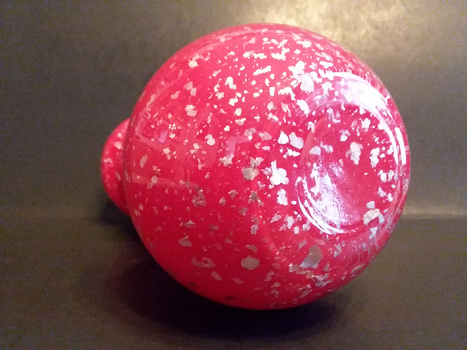 This vase is about 6.5" high x 4" wide. The first image is the closest to the true color which is blood red. The vase is ground flat on top and ground and polished on the bottom. Based on the article below, guessing it was made 1960s-1980s.

This is the best article that I have found about the history of Mikasa.

"Unlike many of its competitors, the company did not own manufacturing facilities. Instead, Mikasa contracted out designs to approximately 175 factories in 25 countries. Production was concentrated in Germany and Austria, where 30 percent of the company's merchandise was manufactured."

This vase has its original label which reads:

This is the second of five labeled Japanese art glass pieces I am buying as part of my initial foray into learning about Japanese art glass. I already have a few pieces of Kurata glass but wanted to see the quality of its contract glass. I wasn't certain that this vase was going to qualify as art glass, based on the fact that it was apparently mass produced by Kurata for Mikasa. Two things decided me to assess it as art glass. First, I found only two examples of this vase after an extensive Google search and a search of various major auction sites, so it was apparently not produced in large quantities. Guessing this may have been a higher quality item, hence higher priced and lower production volume. One interesting thing I did find as a result of that search is that this vase was also made in black, but with an inner layer of black glass. I also found several single examples of differently shaped versions of vases in black and blue which suggests they may have also been produced in red (and other colors?). Second, the quality is very high, with multiple time intensive finishing, grinding and polishing operations. This vase is quite heavy for its size, a substantial piece. I welcome opinions on my conclusions.

I am probably going to have to cheat a bit to buy five labeled pieces of Japanese art glass for $100 by not including shipping costs. This vase was $12 plus $8 shipping and the Kurata sake set was also $12 and $8 shipping, so the total, so far is $24 for two pieces. I have a pretty great piece coming that I paid $44 for with free shipping. I may see what the shipping cost is on the box when it comes and subtract that from the $44. Cheater! The new piece is Hineri by Iwatsu.

I eventually found numerous versions of different shaped vases in this style in blue and black, so they were probably also made in red.