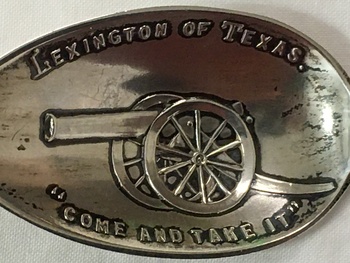 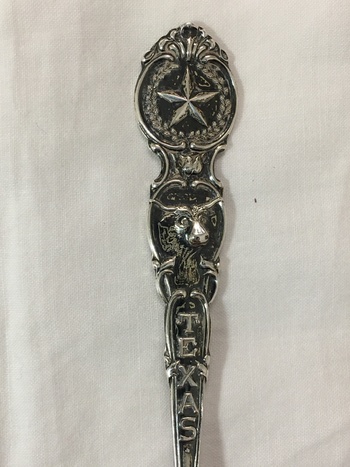 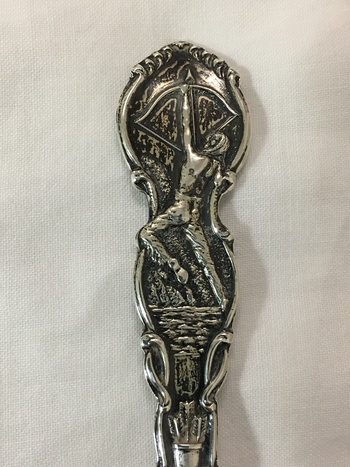 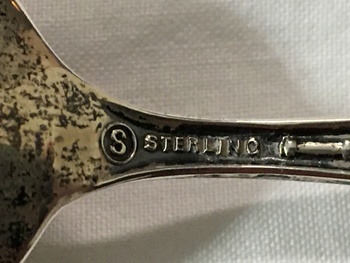 This souvenir spoon was made by Shepard Mfg. Co. circa 1893-1923 in Melrose Highlands, Mass. U.S.A.
Being a Native Texan, I often see this phrase printed on T-shirts and pickup trucks, "COME AND TAKE IT".
We are blessed to have the right to carry a gun in Texas. It might sound strange to some but it is a right that we have and we aim to keep it.
Not too far back in our history some "Texians" were flying a flag containing this phrase and cannon on it.

"The Battle of Gonzales was the first military engagement of the Texas Revolution. It was fought near Gonzales, Texas, on October 2, 1835, between rebellious Texian settlers and a detachment of Mexican army soldiers.

In 1831, Mexican authorities lent the settlers of Gonzales a small cannon to help protect them from frequent Comanche raids. Over the next four years, the political situation in Mexico deteriorated, and in 1835 several states revolted. As the unrest spread, Colonel Domingo de Ugartechea, the commander of all Mexican troops in Texas, felt it unwise to leave the residents of Gonzales with a weapon and requested the return of the cannon.

When the initial request was refused, Ugartechea sent 100 dragoons to retrieve the cannon. The soldiers neared Gonzales on September 29, but the colonists used a variety of excuses to keep them from the town, while secretly sending messengers to request assistance from nearby communities. Within two days, up to 140 Texians gathered in Gonzales, all determined not to give up the cannon. On October 1, settlers voted to initiate a fight. Mexican soldiers opened fire as Texians approached their camp in the early hours of October 2. After several hours of desultory firing, the Mexican soldiers withdrew.

Although the skirmish had little military significance, it marked a clear break between the colonists and the Mexican government and is considered to have been the start of the Texas Revolution. News of the skirmish spread throughout the United States, where it was often referred to as the "Lexington of Texas"