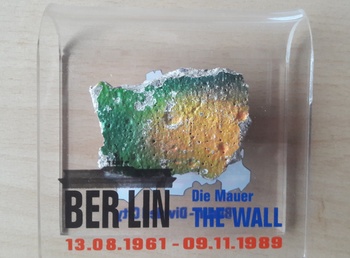 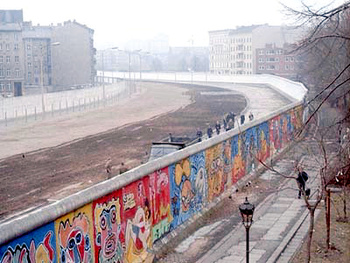 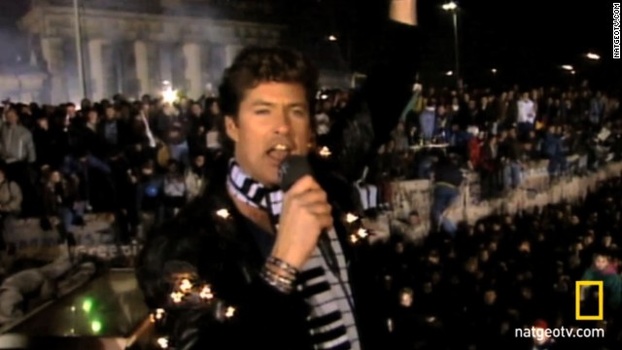 Today, November 9th marks the 30th anniversary of the fall of the Berlin Wall. So it seems appropriate today's post is of my little piece of the wall.

Because the city of Berlin was located entirely within the Soviet zone of occupation, West Berlin became an island within Communist East Germany. The economy in West Germany, as a result of the help provided by its occupying forces, quickly grew. The opposite occurred in East Germany. Valuable assets were shipped back to the Soviet Union and economic recovery was slow and stagnant. Understandable then that people began leaving East Germany. In their millions.

The East German Government closed the border with the west in 1958 and introduced a new passport law to limit emigration. This had the unintended result of drastically increasing the percentage of those leaving through West Berlin. With no barrier and train access still available to West Berlin the Berlin sector border was essentially a loophole through which Eastern Bloc citizens could still escape.
It was necessary therefore for a physical barrier to be erected to stop people leaving and at midnight on 13 August 1961, with little to no warning, the border was closed. The first wall was just a barbed wire fence but it was soon widened and reinforced with concrete and eventually became the formidable sign of division between the east and west that we remember today.

By 1989 Mikhail Gorbachev, was convinced that the Soviet Union needed reform. He instituted disarmament and a winding down of Cold War confrontations in Europe as preconditions to his reforms. It was becoming increasingly clear that the Soviet Union was no longer prepared to support hardline Communist regimes in Eastern Europe.
The fall of the communist governments in neighbouring  countries played a role in the fall of the Berlin Wall. In June 1989 the Hungarian government began dismantling the electrified fence along its border with Austria which allowed more than 13,000 East German tourists to escape through Hungary to Austria. This set up a chain of events. The Hungarians prevented many more East Germans from crossing the border and returned them to Budapest. These East Germans occupied the West German embassy and refused to return to East Germany. This triggered similar events in neighboring Czechoslovakia. This time, however, the East German authorities allowed people to leave, provided that they did so by train through East Germany.
By early November refugees were finding their way to Hungary via Czechoslovakia, or via the West German Embassy in Prague. This was tolerated by the new government, because of long-standing agreements allowing free travel with other communist regimes, however this movement of people grew so large it caused difficulties for both countries. To ease the difficulties, the Government decided to allow a limited number of refugees to exit directly through crossing points between East and West Germany. Later the same day, the ministerial administration modified the proposal to include private, round-trip, travel. The new regulations were to take effect the next day.

Günter Schabowski, the party boss in East Berlin and the spokesman for the SED Politburo, had the task of announcing the new regulations. However, he had not been involved in the discussions about the new regulations and had not been fully briefed. Shortly before a press conference on 9 November, he was handed a note announcing the changes, but given no further instructions on how to handle the information. Schabowski read out loud the note he had been given. A reporter asked when the regulations would take effect. After a few seconds' hesitation, Schabowski replied, "As far as I know, it takes effect immediately, without delay". After further questions from journalists, he confirmed that the regulations included the border crossings through the Wall into West Berlin, which he had not mentioned until then.
The press conference was the lead story on all West Germany's main news programs that night. As these had broadcast to nearly all of East Germany since the late 1950s the news was broadcast there as well simultaneously. ARD's anchorman Hanns Joachim Friedrichs proclaimed, "This 9 November is a historic day. The GDR has announced that, starting immediately, its borders are open to everyone. The gates in the Wall stand open wide."
After hearing the broadcast, East Germans began gathering at the Wall demanding that border guards immediately open the gates. The surprised and overwhelmed guards made many hectic telephone calls to their superiors about the problem. It soon became clear that no one among the East German authorities would take personal responsibility for issuing orders to use lethal force, so the vastly outnumbered soldiers had no way to hold back the huge crowd of East German citizens. Finally, at 10:45 p.m Harald Jäger, the commander of the Bornholmer Straße border crossing yielded, allowing the guards to open the checkpoints and let people through with no identity checking. As the masses swarmed through, a crowd of West Berliners jumped on top of the Wall, and were soon joined by East German youngsters. Thus, the evening of 9 November 1989 is known as the night the Wall came down.