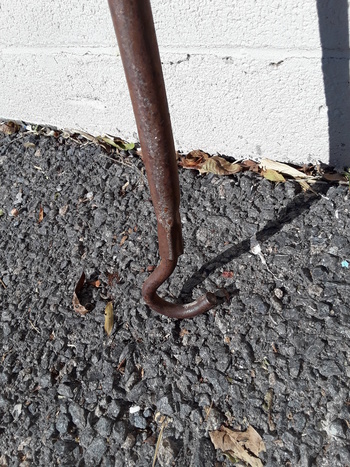 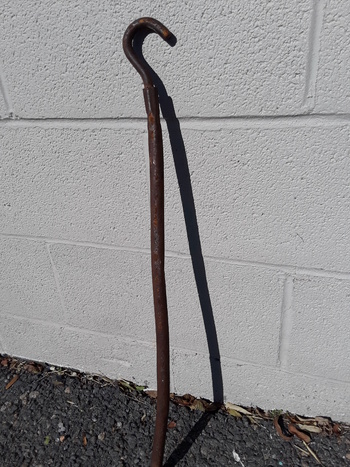 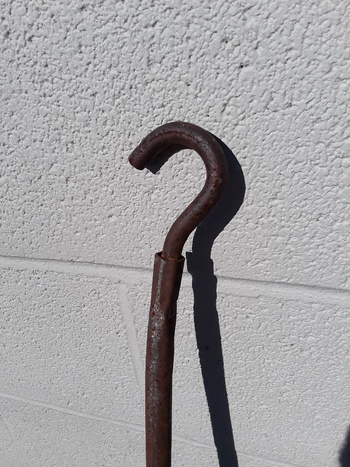 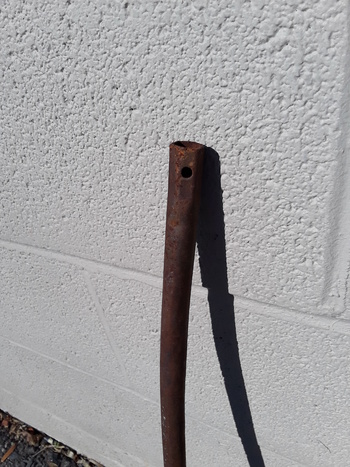 This thing is my 'old metal souvenir' from my recent little trainspotting trip to watch Union Pacific #1404 actually operating and underway, which I showed a few pics and a video clip of last week:

While waiting for that photo-op, at one point I wandered up the tracks just a bit to take a snapshot of the fellow train fans also in attendance -- then also noticed this semi-unusual rusty metal thing laying there in the gravel along with the requisite old spikes and track clamps one always finds trackside -- so I picked it up to bring home and add to my assorted collections of old rusty iron things... ;-) :-) :-)

My first guess was, due to its as-found location, that it was something that otherwise fell off of a train. (and indeed, maybe it could have somehow?) Later that afternoon, when a friend of mine noticed it still laying on the floor in my truck, he glanced at it and said "oh, it's [part of] the hook for cranking the spare tire down from under a [n old] pickup truck bed".

And frankly as soon as he said that, some old gear way back in the back of my brain moved again for the first time in many decades...I **do** sorta remember something at least similar from 40+yrs ago, back when I was just getting old enough to play with "real cars and trucks" instead of "toy" ones...?? ;-) <lol>

Its 'handle' is about 2' long and tubular, the 'hook' is solid and very securely crimped onto its end, the opposite end has been stamped into a hex shape with a couple holes drilled thru probably for a pin that would have attached it to another section of 'crank handle'. I've looked closely and cannot find any stampings or marks to show who really did make it or when.